Balance: The Economics of Great Powers from Ancient Rome to Modern America 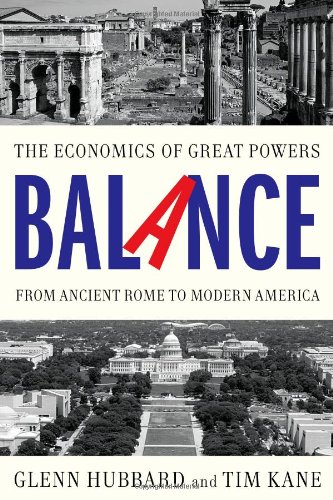 “Dealing with big ideas and important concepts, Balance is engagingly and accessibly told . . .”

Today is so very different. The economy is far from robust. Government is much worse. The magnitude of the problems is reflected by the country spending $3 trillion while collecting only $2 trillion in tax revenues, resulting in a $1 trillion deficit. No enterprise—public, educational, charitable, private, household—can pursue perpetuity pattern of spending more than it generates. If negatives persist, balance cannot be sustained.

The lesson of history is clear: An enterprise must balance its books by connecting spending to revenues generated or otherwise obtain resources either through theft from direct stakeholders or third parties.

The former tactic motivates government policies that transfer monies from the private to public sector, or military conquest, through taking wealth from people of other places. Given that solving internal economic challenges or improving citizens’ standard of living through military conquest is less viable in the 21st century than it may have been in prior times, the role of economic power is of ever greater import in the global community.

Civilization sustainability viewed through the prism of government finance is the subject explored by Glenn Hubbard and Tim Kane in Balance. The scope of their study, captured in the subtitle The Economics of the Great Powers from Ancient Rome to Modern America is visually illustrated by cover images of ancient Roman ruins contrasted to the Capital building in Washington, D.C.

The authors proclaim, “This book is not about empire but about economic data and the hard facts of Great Powers in human history.” They advance the idea that their contribution, “comes from our peculiar domain of economics . . . supply and demand and incentives and constraints and markets are not just for goods and services, but also markets for prestige, security, and political power.” The focus of Balance on economic data is especially timely, with recognition of the important role of big data.

The authors make their case through exploring case studies that cover the globe and trace history from the earliest time to the present day. From studying Rome, China, Spain, Ottoman Empire, Japan, Britain, California, and the United States, the authors conclude “history from ancient empires to modern Europe” teaches “that the existential threat to great civilizations is less barbarians at the gates than the self-inflicted economic imbalance within.”

Mr. Hubbard’s and Mr. Kane’s central theme is that history reflects “a surprising rhythm of policy choices that seem irrational with the benefit of hindsight . . . political institutions are often too slow to adapt to changing economic reality.”

On balance, the scholarship of Balance is admirable, even though at times the writing is clumsy, overly cute, and less then clear. At one point they write, “Leading economies . . . can make progress only by slowly advancing through the thick forest of scientific ignorance, but other economies can run across the open field of established science and technology. For that matter, no Asian countries need to rediscover the laws of economics, accounting, or stock options.”

This statement reflects innocence that extraordinary scientific accomplishments, original innovations, and technology advances are traceable as much if not more to Asia than to the West.

Further, implying that leading economies are somehow mired in “the thick forest of scientific ignorance,” while discounting how leveraging existing technology can lead to great advances is at least curious, if not overtly inaccurate.

Mr. Hubbard and Mr. Kane deftly deploy data to drive home some very important points. One of the most telling is their tracking the shifting composition of federal expenditures, as a function of overall economic activity, over time.

The challenge to the economy is illuminated by the dramatic shift of health and social services from private to public responsibility, generally, and the consequential crowding out of other government expenditures, as entitlements capture an ever greater share of the country’s GDP. Consider the date on federal government expenditures as a function of GDP, as reflected in the following chart:

Whereas six decades ago, the nation’s defense spending was four times entitlements spending, today three times more is spent on entitlements than on defense.

The real problem is that country is akin to a misbehaving, dysfunctional family, as misbehavior of one family member aides and abets the misbehavior of others. Glenn Hubbard and Tim Kane conclude, “The debt mess is a reflection of representative democracy’s worst tendencies—a perverse incentives of politicians to pursue reelection and . . . voters who are not required to consider long term fiscal constraints.”

The consequence of recent economic dysfunction is evidenced by how the deficit rose to some 115% of economic activity in the mid-1940s; thereafter that figure steadily declined to 24% in 1994. Yet, in less than two decades, debt as a share of GDP has skyrocketed to 75%, which rapid rise suggests it shall soon reach the 90% level, identified as the critical tipping point of decline. As the authors write, “The United States . . . is rapidly heading towards a critical level of imbalance.”

That is a consensus—of economists. The consensus of politicians is a rather different kind, a bipartisan unwillingness to take action, arguing that “deficits don’t matter” . . . the deficit should be fixed . . . later.”

While the authors provide a stark warning, by no means are they overtly pessimistic, observing, “Most nations are born and sustained by overcoming crisis. Rome might have fallen one, three, or five centuries before it ultimately did. That lesson should not be lost on modern nations.”

To address the problem, they advocate a new “non-partisan balanced budget amendment,” whose central provision is that “total outlays for a year shall not exceed the medium annual revenue collected in the seven prior years.”

This amendment is necessarily complemented by “returning to Constitutional principles, those are Federalism, a limited central government, and unconditionally free speech and assembly.”

The authors singularly and effectively employ macro measurement of aggregates over time to comprehend larger forces, to isolate critical issues, and to advance analyses that reveal insights that escape those whose tools are limited to textural description.

Dealing with big ideas and important concepts, Balance is engagingly and accessibly told, for anyone with basic third grade arithmetic can follow the important numbers. Balance merits the widest audience.