In the Bag: A Novel 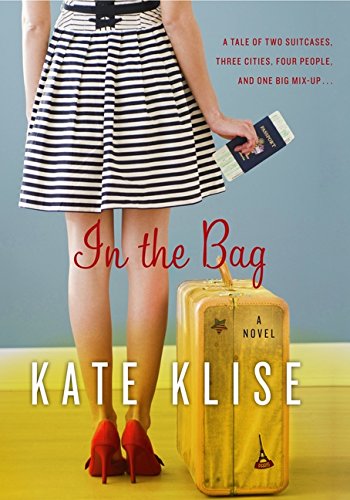 “Reading In the Bag is like taking a bite of fluffy pink cotton candy . . . Stash it in a beach bag for a quick, weightless summer read.”

Inspired by an incident in author Kate Klise’s past when a fellow air traveler slipped a note into her carry-on baggage, In the Bag brings together four characters traveling to Paris on the same plane.

A note and a luggage mix-up provide the original points of contact and the rest is, as they say in the book, kismet.

Andrew Nelson, an art installation designer and single father, and his 17-year-old slacker son Webb, are en route to Madrid via Paris for Andrew’s job. He becomes fixated on first-class passenger Daisy Sprinkle, a superstar chef and single mother. Daisy is headed for Paris with her 18-year-old daughter Coco for a much-needed vacation.

Andrew writes one of the all-time worst pick-up notes and manages to slip it into Daisy’s bag. Webb and Coco swap their identical black duffles in the airport without realizing it. One can see where this is going.

Rotating among the four main characters as narrators, the short chapters of In the Bag fly by at the speed of the now-defunct Concorde.

The most authentic moments in the book are found in the dialogue between the two teenagers, both via email and in person. Ms. Klise deftly captures the vocabulary, rhythm, and nuance of teenaged intercourse, with all its delightful snarkiness and triviality. Coco and Webb are both good kids and also typical teenagers, driving their parents to distraction in their different ways. Engaging and funny, they bring a nice tartness to the narrative.

Their parents are less interesting. Daisy hides her history of bad relationships behind a façade of occasional bitchiness and instant withdrawal in the face of perceived rejection.

Andrew is such a perfect man that one can’t imagine how he ever wrote that offensive note. Nor can one understand why Daisy would be so insane as to push him away once she gets to know him.

Perhaps one could argue that the book is a meditation on the issues of love and communication in the post-digital age, the topic of the art show Andrew installs.

For instance, Andrew, a supremely nice man, fails utterly in conveying his niceness in his note and instead gives the impression of being a total sleaze. He appears to be tone deaf in matters of written communication. In person, he and Daisy get along splendidly (until Daisy erroneously decides he’s trying to disengage).

On the other hand, Coco and Webb develop a sparkling dialogue via email, charming each other until a disastrous face-to-face rendezvous drives them asunder. Is the author making a distinction between the communication capabilities of the pre-digital generation and their post-digital progeny? If so, it is done with a lightness that conceals any serious intent.

In keeping with the blithe mood of the book, the characters’ conflicts are brief and easily resolved. In fact, even Amish terrorists—yes, you read that correctly—cannot dampen this romp through several romantic European cities.

Reading In the Bag is like taking a bite of fluffy pink cotton candy; it produces a burst of intense sweetness then disappears without a trace. Stash it in a beach bag for a quick, weightless summer read.