A Bad Idea I’m About to Do 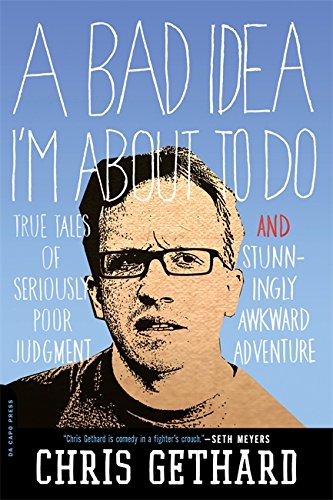 “. . . while A Bad Idea I’m About to Do treads a well worn path, Chris Gethard proves that good storytelling trumps all other considerations when determining if a book is worth reading. Mr. Gethard’s storytelling is very good, and this book is most definitely worth reading.”

Maybe it started 30 years ago with Jean Shephard’s A Christmas Story? Maybe it started with someone else and Shephard was just a popularizer? Either way, American storytellers have been fascinated by bittersweet child-narrated stories ever since.

The narrator/main character in these stories is usually an awkward underdog—his/her parents well intentioned, but ineffectual. All adults are quirky; all kids and teens are teachers’ pets, freaks, or thugs. Since A Christmas Story, the bittersweet-childhood story template has been much imitated—i.e., sitcoms like “The Wonder Years” and “Malcolm in the Middle” and movies like Juno.

Now comedian Chris Gethard applies this storytelling template to his own misspent youth and early adulthood in his memoir, A Bad Idea I’m About to Do.

Mr. Gethard is a product of West Orange, New Jersey, a slumping suburb, and Rutgers University, a slumping state university (at least, as he describes it). These places and other nearby metro NYC locales provide the settings for an abundance of weird and sad experiences.

Mr. Gethard’s short-story chapters are often built around familiar topics—the neighborhood bully, the first girlfriend, the moment of hitting bottom, the first real job—but Gethard’s bittersweet tales are far more ethically complicated than most of what precedes him. For example, author Gethard’s childhood bully, an older boy named Kozoo, was a playmate and a source of wonder—in addition to fear.

Other stories are pretty odd. Mr. Gethard fulfills a childhood fantasy by playing asshole manager to a bad-buy professional wrestler; he bonds with an underdog goat and wins a minor farm-animal competition; he straps a giant cardboard Inspector Gadget display-statue to his car-roof as a show of defiance to a clique of movie theater co-workers; he gets a colonic to remove a disgusting blockage in his bowels.

At another point, he narrates his unlikely rise to a midlevel belt in the martial arts. As if to underscore his duality between being a hammer and a nail, the story he selects for the book title is built around the college age Gethard terrorizing a Princeton student even nerdier than he. At least half the stories in the book work this hammer/nail-duality theme.

Mr. Gethard’s writing is more journalistic than literary. He briefly sets up each story then tells the story. But the straightforward style doesn’t prevent Mr. Gethard from infusing A Bad Idea I’m About to Do with biting slacker wit closer in tone to Harold and Kumar Go to White Castle than A Christmas Story.

The following description of the infamous Rutgers Grease Trucks is a good example: “The very best things Rutgers University had going for it, as far as I was concerned, was a group of trailers called ‘the Grease Trucks.’ They sold sandwiches, including one called ‘the Fat B*tch’ that contained cheese steak, fries, mozzarella sticks, and chicken fingers. Let me reiterate, this was the best thing the place had going for it.”

As Gethard-the-protagonist ages from teen to young adult, we learn that he is talented but messed up. The stories become darker. In one of these latter stories, Gethard considers suicide and seeks psychiatric help.

Another story profiles the satisfaction he gets from driving across country (often by himself) visiting forgotten towns with oddball inhabitants. There’s a whiff of Borat-like condescension to this, but Gethard balances affection with smugness, making these latter chapters just as bittersweet as the early chapters—though in a very different way. While the latter material often gets more serious, it still sits within the bell curve of true confession topics covered in other recent memoirs (i.e., Augusten Burroughs’ Running with Scissors, Anne Roiphe’s Art and Madness, Dennis Milam Bensie’s Shorn)—and the “Howard Stern Show.”

Mr. Gethard is not attempting to save the next generation of slackers from repeating his mistakes. He’s just telling funny and sad stories for our entertainment. And thank goodness for that! Nothing ruins autobiography more completely than sanctimony. So while A Bad Idea I’m About to Do treads a well worn path, Chris Gethard proves that good storytelling trumps all other considerations when determining if a book is worth reading.

Mr. Gethard’s storytelling is very good, and this book is most definitely worth reading.