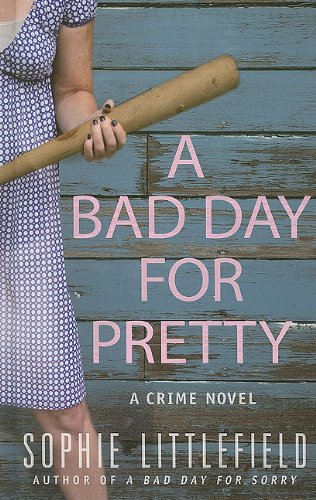 In A Bad Day for Pretty, author Sophie Littlefield seamlessly picks up right where her prior crime novel, A Bad Day for Sorry, concluded.

The pace of this book is slower and more thoughtful due no doubt for the need to allow time for the dynamic main characters, Stella Hardesty and Chrissy Shaw, to recuperate from gunshot wounds and other injuries previously inflicted on them.  Moreover, Stella is attempting to regain her looks after a great deal of reconstructive surgery.  The wild and hair-raising action that led to their injuries involved finding Chrissy’s toddler son, Tucker, who was kidnapped by her untrustworthy boyfriend.

Five years earlier, Stella had dispatched her abusive husband after more than 20 years of enduring pain from his fists.  She had come to realize that trust and love must be proven genuine for a fulfilling and reciprocal relationship.  Although she is the older of the two heroines and her new life continues to be somewhat troubled, Stella is gathering a family of sorts around her as she searches for a sense of calm and permanence.

This is not the hapless kind of searching often found in ordinary chick lit; rather, it is informed by awareness exercised by a maturing 50-year-old woman who is unwilling to be in a situation where she lacks the upper hand.  Stella is known for the variety of justice that she metes out on behalf of her clients: women who are ready to move on from a relationship with an abusive husband or boyfriend.  Stella prides herself on being alert, observant, and willing to wade into dangerous circumstances.  She works hard at assuring the secrecy that allows her to offer her services.

The new twist in this story is that Stella and Chrissy are working for a woman whose husband was the recipient of some “counseling” by Stella due to his drug abuse.  The counseling proved successful; however, the fellow is now embroiled in a matter regarding a mummified body found in storm wreckage at his worksite after a tornado blew though their rural Missouri town.  They must figure out whether he has truly mended his ways or committed a crime that has been hidden beneath a concrete footing at the fairgrounds.

The subplot that dances through the story is the mutual attraction between Stella and the town’s sheriff, Goat Jones.  Each of them has baggage that must be dealt with before they can act on their feelings for one another.  Stella’s is clearly trust.  The sheriff’s takes the form of an almost ex-wife whose beauty has been created by the application of copious amounts of makeup.  Author Littlefield takes the time and effort to explore the meaning of a true relationship for Stella, not just the attraction she feels for a man who nicely fills out his uniform.

The location of these “Bad Day for . . .” crime novels is consistent with Littlefield’s origins in rural Missouri.  This reviewer wonders who the woman was in her childhood that Stella personifies.  Perhaps there were several, such as an aunt, a next-door neighbor, or the mother of a friend in grammar school.  It takes more than observation to build strength of conviction like Stella’s.  Regardless of her origins, Stella has proven to be a most engaging character whose sense of honor and justice has mellowed along with her view of life.  What is remarkable is that Littlefield is years younger than Stella, yet she’s able to convey what it feels like to be a woman of more-than middle age.

The take away from the novel is be comfortable with who you are and most assuredly to know your values, priorities, and limits.  Let’s hope the wait for Stella’s next adventure won’t be too long.