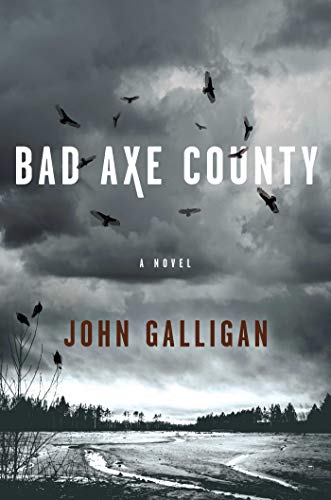 Bad Axe County is the best thriller published this year or maybe this decade. Interim Sheriff Heidi Kick is no one’s idea of the feminine version of A Good Old Boy, and Bad Axe County is not the idyllic American heartland. This corner of Wisconsin is hills and coulees, flash floods turning shallow streams into swollen rivers, and family farms on the verge of bankruptcy. Drugs, sex trafficking, and murder exist side by side with dairy cattle, cheese making, and a ritual male bonding ceremony that poisons all who participate.

Heidi White’s reign as Wisconsin Dairy Queen in 2004 ended abruptly when her parents died in an apparent murder-suicide pact. Twelve years later she is Heidi Kick, wife, mother, and interim sheriff of Bad Axe County, Wisconsin, and just as convinced as ever that her parents’ deaths were murder, period, no suicide about it.

Her chaperone during her time as Dairy Queen repeats what she knows to a Heidi mired in shock and disbelief. “Nothing was stolen, the deputy told me. They don’t think anyone else was involved. These things just happen. Somehow we have to accept them to survive.”

Heidi survives but she never heals, because she knows, and told the sheriff so at the time, something was stolen. The gun, the weapon her father supposedly used during the crime, was not his gun. Someone stole his antique revolver and left the murder weapon in its place.

No one believed her at the time, but Heidi never doubts that her parents were murdered. “I will find you,” she promises the unknown killer whom she thinks of as a zombie in the night stealing away lives. With the death of the very corrupt former sheriff, Raymond Gibbs, and the substitution of Heidi for Boog Lund as interim sheriff, she is in a position to further search for her parents’ killer.

Someone else sees the death of Raymond Gibbs as an opportunity. After four years in the minor leagues, Angus Beavers believes it is safe to return to Bad Axe County. “Best don’t ever come home, his dad had told him. Best just live the dream. But with Gibbs now dead . . .”

Angus calls home to learn his dad is dying of cancer, and that the old chest freezer in the garage has a chain and padlock to keep the curious from opening it. “So maybe he was right. All this time, he had never believed his dad would burn the body.”

As Heidi straps on her duty belt, she realizes that she is losing it, that the fury and frustration over her parents’ murder are seeping into her professional life. When she arrests Horst Zimmer for murder, she “had been privately fixated on the emptiness of Zimmer’s motivation . . . and for eleven days she had vividly fantasized—that she had blown out Zimmer’s zombie brains.”

Her husband, Harley, one-time pitcher for and now the manager of the town’s semi-pro baseball team, the Rattlers, notices that something is amiss with his wife. “As she processed the depravity of the Bishops Coulee crime, her past life and her present life had become scrambled. She was seeing zombie killers everywhere.”

On her way to work she sees an old panel van driven by a tattooed man with a shaved head, who is ranting at an obviously underage girl. Heidi fantasizes chasing him down and blowing his head off. “. . . you sick-brain bastard, so many of you out there hurting people and killing people, one of you took two of mine . . .”

She turns instead to the sheriff’s department. Boog Lund and the rest of her deputies make veiled remarks about her sex, her body, just her in general. Half the county hates her; the other half defends her. Being the first female sheriff in Wisconsin makes her a target.

She tries to shake off her resentment at the disrespect shown her, and concentrate on emergency services that Bad Axe County will need as a storm brings rain, sleet, snow, flashfloods, and ice. Roads will be closed, bridges underwater, utility poles down, and the city council has decreed no more overtime.

The underage girl in the panel truck, Pepper Greengrass, bets Dale Hill, her pimp and unapologetic trafficker in underage girls for sale if you have the money, that her brother had hit six home runs in a Rattlers game August 12, 2012. To settle the bet they check the newspaper archives at the Bad Axe County Library.

As Heidi gives assignments to her deputies, a tip comes in that a tattooed, bald man and a young girl are fleeing the county library after the man assaulted the old librarian. Heidi remembers the man and girl in the panel truck, and takes the call.

Heidi sends a photographer to the location to film all the cars, trucks, and license tags, while she checks on Walt Beavers whom she finds badly wounded. She dials 911 before she is assaulted by an unknown man.

As Heidi pursues her unknown assailant until her car is pushed into the Mississippi, Angus Beavers is attempting to deliver the frozen body of an unknown girl to Clausen’s Meat Market. Clausen’s no longer has meat lockers, but does have CCTV.

Pepper Greengrass constantly snaps a rubber band around her wrist while whispering “You can’t hurt me.” Even Pepper doesn’t believe what she chants as Dale Hill sells her to another man.

As Heidi searches for Pepper, as well as her parents’ murderer, Angus is trying to evade Boog Lund and four former teammates from the Rattlers who know who left the dead girl in his father’s pickup that night of August 12, 2012.

As Bad Axe County is locked in a deadly winter storm, Heidi, Angus, and Pepper each confront their own potential murders at the lands of unexpected zombies of the night.

Bad Axe County by John Galligan portrays a landscape that tense, brooding, suspenseful, dangerous, and a cast of characters that either ooze with corruption or fight it to the best of flawed abilities. Kill the zombies before they kill you or someone you love is surely gone is the mantra of Heidi Kick.

The winter storm so dangerous in its fury is a metaphor for the dangerous evil assaulting Bad Axe County, and it is very effective. As the storm worsens, so does human behavior.

Seldom does a novel blend setting, character, and plot together so seamlessly that one is so caught up by all three elements, that is no escaping their grip. The only flaw, and that so small that it is almost unnoticeable, is that the murderer of her parents that Heidi seeks is so unexpected because clues to his identity are so faint.  Otherwise, Bad Axe County is one damn fine book.