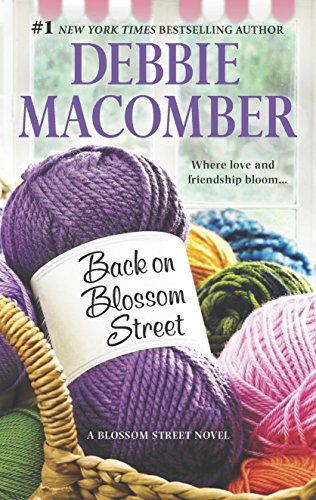 Debbie Macomber takes us back to Blossom Street in Seattle, Washington, to revisit Lydia Goetz at her shop, A Good Yarn. Next door, Susannah Nelson just opened Susannah's Garden where she and Colette Blake, a young widow working as her assistant, produce breathtaking floral arrangements. Across the road, Alix Townsend is a baker at The French Cafe. Lydia's store and classes introduced these four women who become friends despite their dissimilarities.

The story commences as Lydia chronicles events as a diary, introducing the reader to herself and her charming friends. Her narration presents her thoughts and feelings in chapters dedicated to her musings. While other sections focus on Colette and Alix in the third person, this is Lydia's tale.

Newly married to Brad Goetz, Lydia is in love with him and his young son Cody, though she longs for a child of her own; however, after bouts with cancer, the chemotherapy is likely to make that impossible. She finds solace in her craft with the statement: "Knitting was my salvation. That's something I've said often, I know, but it's simply the truth. Even now, after nearly ten years of living cancer-free, knitting dominates my life. Because of my yarn store, I've become a part of the community of knitters and friends."

Colette, grieving over the tragic passing of her husband in an accident a year before, sold her house and now leases the apartment upstairs from A Good Yarn. The two grow close but Lydia, not one to pry, concludes the young woman is holding on to secrets she does not want to disclose.

Susannah uses Colette's expertise to market her business and make it profitable, while wondering why her new employee would leave a well-paying, high-powered job to work for peanuts in a florist shop.

Meanwhile, Alix is stressing over her upcoming marriage to preacher Jordan Turner, whom she loves without reservation. With her shady past, she considers herself unworthy to be a good enough wife of a minister. In addition, the small, intimate nuptials Alix envisions gets blown out of proportion when Jordan's mother and Alix's good friend and landlady Jacqueline, create an elaborate wedding. Beside herself with anxiety because she does not know most of the people invited, the thought of appearing before a bunch of strangers makes her consider canceling the nuptials.

The women share their trials and tribulations, but it appears there's never a dull moment, in particular after Lydia's niece, Julia becomes the victim of a carjacking.  Margaret, Julia's mother and Lydia's sister as well as employee, goes off the deep end with her need for retaliation against the perpetrator of the crime.

In spite of all this, Lydia's answer to everyone's problems, not only her own, is through knitting. She arranges a new class for her friends where she plans to teach them how to make a prayer shawl, the directions of which are included in this book. Mentioning her lessons, she writes: "It seems to me that each woman who signed up for one of my knitting classes taught me a valuable lesson. I suspect that's another reason why I feel so close to many of them."

The foursome come together to knit, unwind, and attempt to solve their problems while solidifying their companionship.