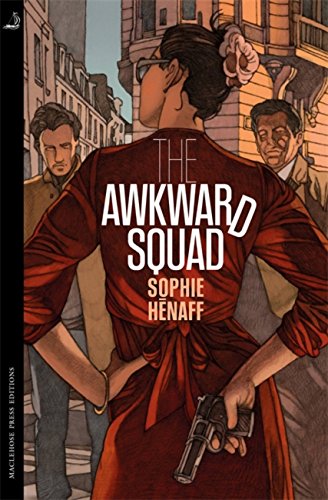 "One can only sincerely hope that this is the first title in a very long series."

A marvelous French police procedural laced with subtle—and sometimes, not so subtle—humor about a squad of assorted losers who cannot be fired, but cannot be tolerated among competent and professional police officers either. This may be the best French export since the first bottle of the best red wine.

Enter Commissaire Anne Capestan, a former rising star now finishing her six-months-long suspension for “one bullet too many” when taking down a psychopathic felon, and assuming her superior officer Buron intends to fire her.

That would be the icing on the cake of her life. Her husband has walked out, taking most of the couple’s furniture with him; she has spent the last six months reading detective fiction, taking long walks, and anticipating either being fired or sent to the provinces; either way she can’t get on with her life until she knows her employment status.

She is surprised to learn not only is she still employed, but has been given a squad to command, but not the kind she might wish for, which Buron relishes in defining. “The drunkards, the thugs, the depressives, the layabouts, and everyone in between . . . are all to be absorbed into one squad forgotten about in some corner. With you in command.”

Among the “winners” in her new squad is Jose Torrez, “better known as Malchance: the unlucky charm, the black cat you would never want to cross your path.” Although he is never at fault, his partners have all met with mischance, usually fatal. “Every police officer in the country knew Torrez by reputation and would always cross themselves when he was nearby.”

Capestan doesn’t care about his reputation. She is not superstitious, although another superior assures her that she will be.

Another member of the squad is not one Capestan welcomes. It is Commandant Louis-Baptiste Lebreton, the officer from IGS, the French Internal Affairs, the man who hounded her unmercifully.

Another shocking member to join the team is Capitaine Eva Rosiere, a police officer who decided at age 36 to become a writer. So successful is she that she sells millions of copies which translates into millions of Euros and a hit TV series. Her books lampoon the prosecutor’s office and her own police colleagues without mercy. Each individual is so thinly disguised that everyone easily recognizes them.

Embarrassed and humiliated, both the prosecutor’s office and the police want to get rid of her, but she refuses to resign. Thus the transfer to Capestan’s squad.

Rosiere brings lots of money with her and nearly singlehandedly funds redecorating the rundown apartment assigned to the squad, as well as updating the equipment. She and her tiny dog, Pilou, the squad’s K9 unit, partners with Legreton, on whose body she had designs until learning he is gay.

Among other recruits to her squad is Capitaine Orsini, investigator and leaker to the press; Capitaine Merlot, drunkard, always accompanied by a strong smell of red wine; and Lieutenant Evrard, young, curly blond hair, and a compulsive gambler.

It is up to Capestan to make something out of her misfits, so she assigns them to searching the dozens of boxes of cold cases looking for something better than the fraud, breaking and entering, petty theft, etc. that every officer dumped on the squad.

The squad finds not one, but two murder cases among the hundreds of files. One is the murder of an elderly woman in a botched robbery seven years ago. The other is the unsolved murder of a sailor whose bullet-riddled body is found floating in the Seine more than two decades ago.

There are peculiarities about the elderly woman’s murder. After seven years the crime scene remains exactly as it was—minus the body—as the victim’s brother said he was leaving it as it was because he believes that his sister was murdered, and he doesn’t want to disturb the crime scene.

Capestan and Torrez notice other anomalies: judging from the cat hair on the furniture, the victim owned a cat, but there is no mention of such in the file, and there is no evidence of feeding or water bowls. Also, why did the murderer do the victim’s hair and pose her on the couch?

In the case of the murdered sailor, Rosiere and Lebreton learn that the victim, Yann Guenan, had been working on the Key Line Express, a ferry that went down off the coast of Florida with 44 deaths. Maelle Guenan, Yann’s wife told the detectives that her husband claimed the shipbuilder, Jallateau, was to blame, Yann had built a case with interviews with all the survivors and confronted Jallateau.

“And three days later, he was dead. No illness, no accident. A bullet.” Maelle Guenan adds to her statement. “And to this day, there hasn’t been a single arrest.”

When Maelle Guenan is murdered, Capestan and her misfits believe it is because the killer looked for the journals about the shipwreck that her husband kept besides the file with which he had confronted the shipbuilder.

When the same young man is seen near the scenes of both the old lady’s and Maelle Guenan’s murder scene, Capestan is absolutely certain the two murder cases are connected.

Well-written, well-plotted, with the sights and sounds of Paris as well-described and evocative as the scent of a freshly baked and buttered loaf of French bread and a bowl of bouillabaisse, Henaff’s Awkward Squad is an absorbing, sometimes laugh out loud, humorous mystery laced with some graphic scenes of violence’s aftermath. One can only sincerely hope that this is the first title in a very long series.