Awash with Roses: The Collected Love Poems of Kenneth Patchen 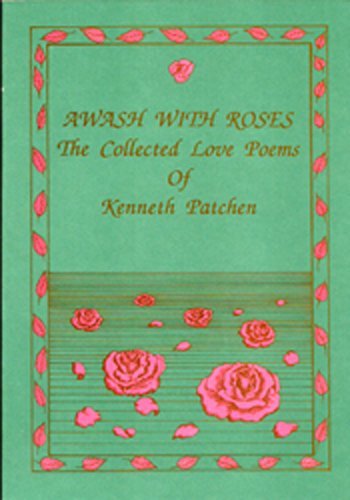 “Yawp,” “mudluscious,” “lullly, lullay!” Modern poets broke all rules as they infused their work with everything new: invented words, imagism, concrete poetry, free verse, irony, oxymora held together with steely differences, and their individual eccentricities. The poets of this era both stunned and pleased the literati and critics.

Whatever their “modern” period is called in the future, its brilliance cannot be denied, and Kenneth Patchen’s work, an example of poetic freedom, will remain timeless.

Students of modern poetry well know the names of some of the founders of modern verse: Whitman, Dickinson, William Carlos Williams, HD, Wallace Stevens, e e cummings et al. Mr. Patchen is less familiar, perhaps, but he may have had a stronger influence on American poetry than some of the more famous writers, most of whom were Mr. Patchen’s acquaintances or friends.

Although Mr. Patchen, an outspoken pacifist, is famous for his vivid and tragic anti-war poetry, his remarkable love poems may be more important; and Awash with Roses: The Collected Love Poems of Kenneth Patchen is now available once again.

The reissue of his love poems testifies to his talents and perhaps meets the current need to cherish the beauty of life, love, and mankind. . . . Today, with political and economic unrest, with individual expression suppressed in many parts of the world, humankind yearns for a soothing of souls.

Mr. Patchen fervently loves both the individual and the integrity of man, and the importance and meaning of ordinary objects, always positive, enlightening and touching.

“Everyman is me, I am his brother. No man is my enemy. I am everyman and he is in and of me. This is my faith, my strength, my dearest hope, and my only belief.”

Clearly, Mr. Patchen’s wife, Miriam, is his muse, and much of his work is devoted to her. The couple was not only extraordinary in their devotion to each other, especially since often they in lived in extreme poverty, but also because as, James Laughton, their publisher and friend wrote, “the special bond that the Patchens shared was ‘duo-hermetic.’ I never knew a couple quite like them, so totally absorbed in each other . . . the Patchens never did anything ‘the easy way,’ or without total commitment, and that included their loving each other.” (Mr. Laughton’s term, duo-hermetic, means fused or symbiotic.)

The modern movement also birthed concrete poetry, where the positions of words and lines on the page have meanings of their own, relating to the denotation and connation of the words. Some of Mr. Patchen’s love poems work in this way, and more, since the poet is also an artist. Many of his poems are inked or painted in heavy black letters and lines. Some show creatures, birds, mythical or stylized animals or figures that represent humans as they accompany the poetry; supplementing explicating.

Imagism is still another movement within modernism. If William Carlos William’s “The Red Wheelbarrow” is a classic example; Mr. Patchen’s “Plow Horses” is another.

“So much depends upon a red wheel barrow glazed with rain beside the white chickens.”

“They stand contentedly chewing
What does it mean to live now?

They are solid and their muscles move
Easily in the oil of their blood.
What does it mean to live now?

They put their faces together like children
And their gentle eyes look at me
What does it mean to live now?

I run my hand along their necks, lovingly.”

Like Williams, Mr. Patchen emphasizes the simplicity of the image to explode in meaning.

Further, Mr. Patchen’s poetry reads as if he finds word choice deep in his soul. Such depth makes the poetry tension in his oxymora and ironic connections nearly unbearable to the reader. Consider, “fragrant silence,” “wordless prayer,” (“Permanence”) or “bonfire of sound.” (“In Judgement of a Leaf”).

Mr. Patchen relies on a long list of favorite symbols in Awash with Roses. Flowers (especially roses), woodland animals, seas, light and dark, heaven and earth and everything about his love of Miriam and, by extension, love of womanhood. He writes of eyes, hair, skin, breasts, and nudity, and sexual union. Yet the love poems of Mr. Patchen rise above the work of many romantic poets. Mr. Patchen brings all his devices together, another fusion, perhaps, resulting in a beauty that stirs the reader’s aesthetic consciousness. The last lines of “23rd Street Runs into Heaven” are such lines:

“For a moment; turn and face me—
Smile in a way that only women know.
Who have lain long with their love
And are made more virginal.
Our supper is plain, but we are very beautiful.”

This edition of Awash with Roses has an interesting bonus for readers. The book starts with a biography of Mr. Patchen’s life, from childhood when he tore pieces of scrap paper up, scribbled on them, and pretended to read to his parents, through his meeting, courtship and marriage to Miriam, to his life of poverty, and his painful end.

The brief biography, by Editor Larry Smith and his daughter, Laura, is well written and precise. The Patchens traveled widely in literary circles, and accounts of their relationships with many of the famous poets and writers of the era make very interesting reading. This material further enhances the poetry in Awash with Roses for readers.

Lovers, regardless of gender identification or sexual preference, will delight in this book.