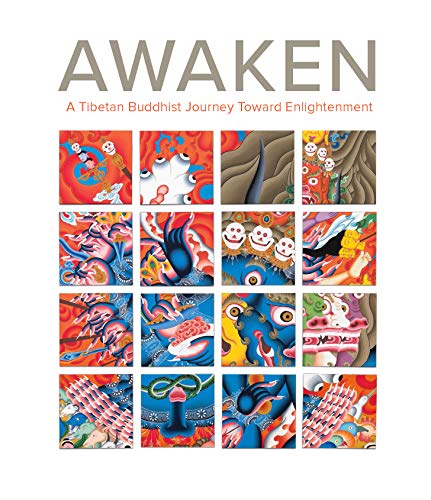 “Awaken is a gem for students and practitioners of art, meditation, Buddhism, and/or Asian culture.”

Awaken is a gem for students and practitioners of art, meditation, Buddhism, and/or Asian culture. It belongs to a series of distinguished art books published or distributed by Yale University Press. Like others in this series (The Tale of Genji, Art of China, and Empresses of China’s Forbidden City, all published in 2018–2019) Awaken is keyed to major exhibits—in this case, at the Virginia Museum of Arts in 2019 and the San Francisco Museum of Asian Art in 2020—with essays by curators at the two museums, John Henry Rice in Virginia and Jeffrey Durham in San Francisco.

Each of these books is lavishly illustrated with texts written in clear, easy-to-understand, non-technical English. Besides the chapters by Rice and Durham, nearly half the pages in Awaken consists of essays by specialists such as Katherine Anne Paul on “Tools of the Trade: Implements for Enlightenment” and Tsherin Sherpa with Paul Ferguson on “Traditional and Contemporary Art from the Himalayas.”

Rice and Durham remind us that cell phones and other features of modern life keep us up but seldom deeply awake. Tibetan Buddhism aims to cultivate Vajrayana, the “Lighting Vehicle,” which aims to convey practitioners rapidly to enlightenment. Tibetan scroll paintings are called thangka--“mirror.” To study a thangka is potentially to see an aspect of one’s own mind and thereby obtain “liberation on sight.”

The illustrations in this book aspire to give insights into what Tibetan Buddhist art may conceal and reveal—a path (though not the only one) to a more focused, integrated, ad wakeful state of awareness.  Thus, on page 25 we see the bodhisattva Vajrapani (he who holds a vajra thunder bolt) standing next to the Buddha, protecting him, on a gray schist sculptured relief done in second century (what is now) Pakistan.

To shortcut through the eons usually required to achieve enlightenment, Vajarayana instructs the aspirant meditator to think of him/herself as already enlightened. Thus, the “path” becomes the meditative simulation of the eventual result, the state of being a buddha.

The chapter on ancient innovations and thangka treasures says that figures in certain thangka paintings receive heavy-handed shading on the edges of the limbs. While intended to create the impression of volume, this technique creates a marionette-like effect.

The book would benefit from more comments on the styles characteristic of Tibetan art. Many Westerners will be puzzled and even put off by the garish red-orange colors around blackish figures in many paintings. The wildly colored monsters threatening goodness may put some aesthetes’ teeth on edge and push them away from inner calm. More explanatory comment might calm the agitation.

The book ends with a chapter by a “transformer,” Tsherin Sherpa, who redoes traditional art and goes on to create contemporary abstracts that convey similar ideas. In 2003 he was commissioned by Jamba Juice in San Francisco to create a poster for its “enlightened smoothie” campaign. The poster (Figure 83 in the book) shows the many fruits, lotus flowers, and celestial forces (but no Buddhist deities) that enliven a Jamba drink. The poster, plastered on subway walls, encouraged other Himalayan artists. One such work (Figure 84) shows the author of Genesis composing his text in colors that could derive from Tibetan art. But Tsherin Sherpa cautions that tradition is in decline no matter the signs it is thriving. There is little demand for such art, and old masters are passing on.

Besides its works on Asian art, Yale is also publishing or distributing books on US and European art such as Whistler in Watercolor for the Freer/Sackler, American Pre-Raphaelites for the National Gallery of Art, and Gauguin Portraits for the National Gallery of Canada. Life may be short, as Hippocrates and Goethe put it, but Yale University Press and its associated museums are contributing a major service to keeping “art long.”