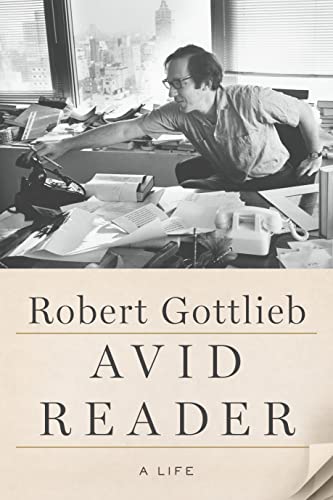 As a boy and a young man, Robert Gottlieb read for the love of reading itself. Later he read because his career demanded that he do so. Then, beginning in 1988 and over the course of the next 25 years or so, he shifted gears and reinvented himself. From then on, his life would center, not on reading, but on writing books, articles, and book reviews.

In fact, for decades Gottlieb churned out a steady stream of exceptional books, including A Certain Style: The Art of the Plastic Handbag, 1949–1959, George Balanchine: The Ballet Maker, and Great Expectations: The Sons and Daughters of Charles Dickens. The titles alone indicate the breadth and depth of his cultural interests.

For the most part, however, as Avid Reader: A Life makes clear, Robert Gottlieb will probably be remembered by historians and biographers not primarily as a reader and a writer, but rather as a hardworking editor and a consummate literary middle man who brought loads of the best contemporary books to some of the most sophisticated and curious readers in the English speaking world.

I met Gottlieb once at a diner party for Doris Lessing on Long Island in the spring of 1969 when she was visiting the U.S. for the first time and enjoyed the attention she received from her fans.

Gottlieb had been her editor at Simon & Schuster, where he rose to the top and called the shots. He continued to be Lessing’s editor when he moved to Knopf and she followed him.

Gottlieb inspired that kind of loyalty and no wonder. He was intelligent, he cared about good writing and good writers, and he made sure they both received acclaim and recognition.

Lessing makes a brief appearance in Avid Reader, and while she won the Nobel Price for Literature and reinvented her career again and again, even after she published her classic, The Golden Notebook, she was not the most famous writer that Gottlieb published. That designation belongs to Bill Clinton.

Moreover, probably the single most dramatic moment in Avid Reader occurs when Clinton tells Gottlieb, “You’ll find that I’m very easy to work for.” Gottlieb replies, “I’m not working for you, you’re working for me.” He adds, “It was cheeky, and it was deliberate.”

Gottlieb offers the names of most, though not all of the writers he published. He doesn’t mention Gerald B. Nelson whose book Ten Versions of America he put into print because he liked it and the author and wanted to help him advance his academic career.

Someone merely browsing through Avid Reader might conclude that the book is one long, extended list of names, along with capsule biographies and selected bibliographies. Thankfully it is not that, but rather a comprehensive cultural and intellectual history of New York publishing with a personal twist and breathtaking candor.

Still, at times the book can be formulaic. Gottlieb himself says he has a “structural mind.” Not surprisingly, this is a structured memoir with few if any digressions, interludes, or asides. The author compresses, digests, and arranges. Then he systematically moves on to another phase of his career and another batch of writers and their work that he in turn digests, compresses, and arranges. He’s definitely thorough; few authors will feel omitted or slighted.

Perhaps the most exciting chapter traces Gottlieb’s brief career as the editor of The New Yorker after William Shawn departed and before Tina Brown arrived. Gottlieb doesn’t pull any punches when he writes about the cream of the cream of America’s intelligentsia. Of Susan Sontag, he says that she had “ruthless determination,” a “sense of privilege,” and a “get-out-of-my way stride.” He adds the word “charm” to describe her. No matter how sharp his barbs, Gottlieb always manages to find something kind and considerate to say about the writers he published.

One might also observe that the author of Avid Reader exhibits “ruthless determination” and a “sense of privilege.” Indeed, Gottlieb includes the trenchant criticism that his colleague, Michael Korda, made about him in his own memoirs, Another Life.

Korda observes that Gottlieb “had a need to dominate, which was hidden deeply” and the need to see himself as “someone totally without ambition.” Gottlieb quibbles briefly and then adds, “Michael may have had a point.” Indeed, one probably couldn’t publish ambitious, driven writers unless he or she was also an ambitious, driven editor.

Avid Reader offers plenty of satisfying literary gossip, but there’s very little discussion of sex and sexuality, though Gottlieb published with great delight The Hite Report on Male Sexuality. Moreover, Gottlieb offers few anecdotes about sexual escapades and sexual hijinks, which is odd given the fact that he edited all through the sexual liberated 1960s, 1970s, and beyond. Still, that’s not surprising; he calls himself a Puritan and Puritanical.

But the behind-the-scenes look at publishing more than makes up for the absence of pillow talk and titillating tales about lovers and bedroom fireworks.

Gottlieb was not only a pivotal New York editor, he also played a seminal role at a crucial moment in the world of publishing, and while he recognized good and even great literature and wanted to put it into the hands of appreciative readers, he was never a dilettante, an aesthete, or an academic. He wanted to sell books, promote and market them, send authors on tours and put them in front of TV cameras and radio microphones.

In the 21st century, editors and publishers like Gottlieb look more and more like dinosaurs. Hopefully young, avid readers will want to follow his lead and help to revive a lost art.

Avid Reader ought to bring Gottlieb the attention he rightly deserves after so much work behind the scenes. His mantra—“Do it now. Get it done. Check, check, and check again”—might well be highlighted at Google, Amazon, Wikipedia, and wherever books are edited and published.