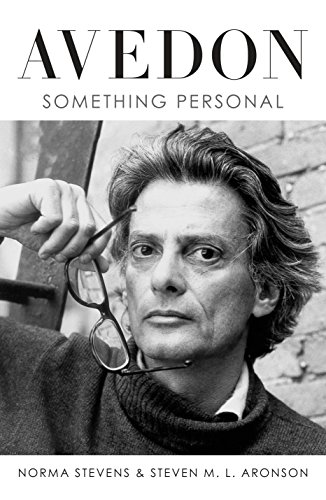 Richard Avedon was the most famous fashion photographer in the world, but for much of his life struggled to be taken seriously as an art photographer. He was famous from the start for rebranding the fashion houses in Paris in the wake of WWII. His verité style portraiture of celebrities were loved and hated in equal measure.

He worked with agent Norma Stevens for 30 years after she arranged a first of its kind exhibit of Avedon photography at the Museum of Modern Art; during that time she became his confidant to the point where he casually mentioned she should write his biography, adding the caveat “Only, don’t be kind—I don’t want a tribute, I want a portrait, and the best portrait is always the truth. Make me into an Avedon.” And Stevens does in her bulky biography Avedon: Something Personal.

The book clocks in at near 700 pages. Stevens and co-writer Stephen M. L. Aronson discard conventional bio-history structure, diving into Avedon’s cyclonic world of international fashion photography and the New York art world both at any given time featuring Avedon at the eye of the storm. The first chapters “Curtain Raisers” and “Show of Shows” are intoxicating as are those of Avedon in Paris during the halcyon days at Harper’s Bazaar and later at Vogue.

It is no surprise that celebrities populate the book. Models Twiggy Dovima, Veruschka, Naomi, Christy, et al. And models who became actresses: Isabella Rossellini, Marissa Berenson, including Marilyn, Judy, Audrey, Sophia, Elizabeth, and Barbra, as well as the infamous from the Chicago Seven and Black Panthers to Warhol and his Factory superstars. Add of course a who’s who of the fashion industry including titans Polly Mellen, Anna Wintour, and Diana Vreeland not to mention celebrity writers James Baldwin and Truman Capote.

More than a hundred pages in we finally time-travel back to Avedon’s childhood, and eventually we meet his family. His father, the proprietor of a successful woman’s clothier on 5th Avenue during the 20s, lost it all in the crash of ’29. Avedon had an adversarial relationship with his father, who viewed Richard’s interest in art and poetry as being too effeminate. There is the heartbreaking story of Avedon’s troubled sister Louise who became his first model. And his relationship with his cousin Margie, his best friend and with whom, Stevens reports, he had a sexual relationship while in his teens.

Avedon’s mother Anna encouraged his artistic pursuits, taking him to shows on Broadway that he loved; this contrasted with his father wanting him to toughen up and be a serious son. He started writing poems and photographing in high school. Then to escape, Avedon joined the merchant marines and took official photos of the sailors. Later this training was recognized as an apprenticeship that developed his portraiture style. His collaborations with mentor art director Alexey Brodovitch, editor Carmen Snow, and Diana Vreeland are stuff of fashion legend.

Stevens writes sensitively about Avedon's personal history. One of the most haunting episodes is Avedon’s reconnection with his father Jack, estranged from his family and living in Florida, where Avedon sought him out as a photographic subject, completing portraits of his father as his health deteriorated.

Immersed in the world of fashion, Avedon fell in love with Dorcas “Doe” Marie Nowell. He and Doe drove into Paris standing in a cab, careening toward the Eiffel Tower drinking champagne and never went to bed. His fashion shoots on the streets of Paris are not only legendary, they were later finally recognized as works of photographic art even though he was selling haute couture.

Avedon married Evelyn Franklin in 1951, and they remained married until her death in 2004. Their son John was a writer and authored a bio-history of the Dalai Lama. Midway through the book Stevens recounts the night that Avedon came out to her as gay and reveals his secret affair with Mike Nichols, who was known as Avedon’s best friend, but their long affair had them eventually entertaining the idea of “running away together.”

When he got older Avedon struggled to be an out gay man and not hide his relationship with a successful lawyer, but couldn’t bring himself to do it, and his lover decided he didn’t want to play that game anymore, although they remained intimate friends.

Meanwhile, even as Avedon dominated the pages of Harper’s Bazaar and Vogue he wanted more and was later hired by Tina Brown as an art photographer for The New Yorker. Avedon was bored with fashion shoots but continued to work to subsidize his art photography projects, including being the mastermind behind the industry-changing Calvin Klein jeans ads. There is also a fun and enlightening chapter on his longtime collaboration with designer Gianni Versace.

Even more engaging are Stevens’ detailed accounts of Avedon’s non-celebrity projects. He was an antiwar activist in the 70s and an in-country photojournalist during the Vietnam War. His portrait of Vietnamese who were burned by napalm were controversial, and Avedon said that he was unsatisfied because he didn’t show more horrific carnage. Also fascinating is Stevens’ account of Avedon’s six-year excursion for his exhibit “In the American West,” where he shot thousands of portraits in remote locations. The show toured the country and took a beating from art critics, but is now acknowledged as groundbreaking and exemplary of Avedon’s aesthetic.

There are a gallery of reminiscences by dozens of people who worked with or knew Avedon; as such, Stevens and Aronson decided to make the book a repository of oral history about Avedon. Many are concise and entertaining, most loving remembrances, but quite a few rehash Avedon’s foibles and faults, including some obviously remaining grudges.

Stevens uses private photographs in the book, many touchingly intimate of Avedon himself, but it is disappointing that none of Avedon’s fashion photography or portraiture appears. Avedon lived a singularly fascinating life and his magnetic personality comes throughout Something Personal. On balance, you wish that Stevens would have exercised a bit more control and narrative shape to the material, but no doubt this is an essential portrait of a complex man, his times, and his art.