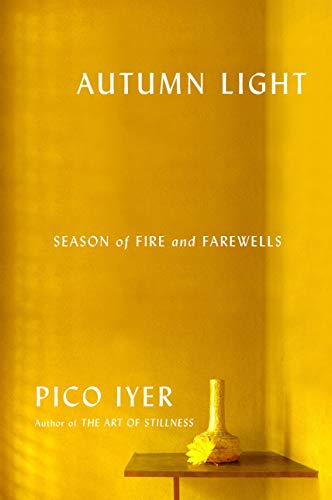 “The memoir succeeds, with its deceptively quiet descriptions of autumn both in the natural world, and in the season of his and Hiroko’s own lives, in echoing a uniquely Japanese appreciation of the fleeting nature of time, as well as the humbling acceptance that nothing lasts.”

Even today, when the notion of spending long periods of time in a foreign country is more common than ever before, there are not many Westerners who decide to pick up and move to Japan. This, however, was the case with Pico Iyer, a British-born American essayist and novelist best known for his travel writing.

His 1991 memoir, The Lady and Monk, recounted the story of his romance with the Japanese woman, whom he met while in Kyoto, who later became his wife. In Autumn Light, he offers a sequel of sorts, with a new memoir that opens 30 years after The Lady and the Monk left off.

Iyer and Hiroko, who appeared as “Sachiko” in the earlier memoir, are living in Nara, a historic city 20 miles south of Kyoto. When Iyer isn’t writing his journalistic pieces and essays, he can be found visiting his mother-in law, walking to the nearby post office, or playing ping pong with the pensioners at his local health club. It’s a tricky juxtaposition, but Iyer revels in the dissonance between the various parts of his life.

“I look at the eighteen-dollar bat I bought form a department store and am reminded how different I still am from my passionate hobbyist friend; they’re waggling a finger under the table, like Olympians, to show partners how they’re planning to serve, while I‘m trying to unriddle my piece for The New York Review of Books on the warlords of Mogadishu.”

Yet these quotidian activities serve as a backdrop to reflections of a more profound nature. In the wake of the death of his father-in-law, Iyer sees everything around him through a meditative lens, and as autumn erupts in brilliant fall foliage and cold rains, he contemplates the transitory nature of life.

“Beauty, the foremost Jungian in Japan has observed, ‘is completed only if we accept the fact of death.’ Autumn poses the question we all have to live with: How to hold on to the things we love even though we know that we and they are dying. How to see the world as it is, yet find light within that truth.”

Interwoven between the ping-pong and the autumn leaves are darker, more troubling strands. Hiroko’s brother, a Swiss-trained analyst, is painfully estranged from the family, refusing their every effort at reconciliation, even in the wake of his father’s death.

And then there is the war. Iyar’s amiable ping-pong opponents are survivors of a past which remains for them, even now, both baffling and horrifying. “When I go back to the ping-pong club today, I start to make the calculations,” Iyar tells us. “My tiny, intrepid friend in the black slacks, Mrs. Fukushima, is eighty-three. That means she was eleven when Japan entered the war, and probably had to join other young women in bayonet practice, using bamboo spears; in her teens, she may had to get her protein eating worms and snakes . . . Mr Gold Tooth, so full of boyish giggles, kindly, Mr, Joy, the one with the, soft smile, all were in their formative years when up to eight thousand civilians were killed in two and a half hours during the firebombing of Tokyo . . .”

Iyer’s writing is both simple and lyrical, an apt style for a British/American with Indian roots living in Japan. The memoir succeeds, with its deceptively quiet descriptions of autumn both in the natural world, and in the season of his and Hiroko’s own lives, in echoing a uniquely Japanese appreciation of the fleeting nature of time, as well as the humbling acceptance that nothing lasts.