The Autistic Brain: Thinking Across the Spectrum 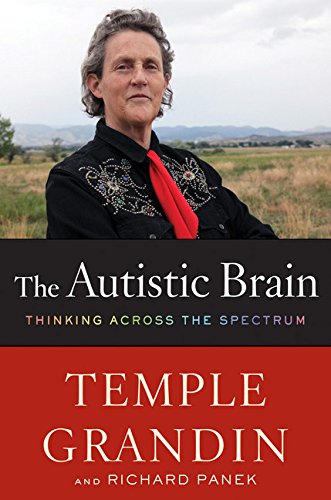 “. . . of enormous service to the millions of autistic individuals . . . anyone labeled with a disability, and to the rest of us curious about the brain and the intricacies of human experience.”

One of the services Temple Grandin renders in her new book with Richard Panek is advocating an end to one-size-fits-all thinking about autism. Indeed, where Part I of the book concentrates on “the autistic brain,” Part II is given to “rethinking” it.

Dr. Grandin lays out evidence any reader can follow. A major argument is with the DSM (psychiatry’s Diagnostic and Statistical Manual), whose inclusion criteria and categories per se need rethinking––until much more is known about autism’s cause, or whether the varied behaviors now under the autism label even represent a singular disorder in any fundamental sense.

Dr. Grandin would like to find genetic, neuroanatomical, or chemical common ground; however, the range of the autism “spectrum” formalized by the previous DSM–IV (1994) “is part of the problem.” She prefers not trying to label a collection of symptoms, but rather to take each symptom at a time and attempt to match it with biology.

What follows is a smart and sensitive analysis of the muddle of autism diagnosis, especially how it has lurched over editions of the DSM without the ever-changing criteria having a bona fide scientific basis. Her own experience and interviews with autistics worldwide tells her that it makes the most sense to assign diagnoses based on one’s main symptom.

“We can wait 20 years and several more editions of the DSM before we start to clean up the mess.” Or we can get past being “label-locked,” and talk about an individual child’s specific problems. Someone labeled with Asperger’s may give up on their education, figuring they will never hold down a job. “Their whole life starts to revolve around what they can’t do instead of what they can do.”

Changes in this year’s upcoming DSM–V particularly alarm the author in their elimination of 40% of those now diagnosed on the autism spectrum. Denial of health coverage will inevitably follow if one isn’t labeled according to the manual’s imprimatur.

Those “Aspies,” a term Grandin uses with evident affection for individuals with Asperger’s syndrome, who have only social impairment and not repetitive behavior, are tossed out of the autism category and moved elsewhere.

“Rubbish,” she says. “To my way of thinking, social impairments are the very core of autism.” This of course is the familiar plea of someone with first-person experience to experts who have only a third-person point of reference. To judge by history, the experts rarely heed the practical advice they are given.

Inasmuch as an autism diagnosis rests on specific behaviors––“what the experience looks like from the outside: the acting self, rather than what the experience feels like from the inside: the thinking self,” part of her rethinking is to offer ways to identify and either cope with or minimize the assorted visual, auditory, and tactile oversensitivities that lead to outbursts, avoidance, and similar disruptive behavior.

By taking into account the stark discrepancy between how some individuals think and how they observe their physical body acting, Dr. Grandin lays out evidence that many nonverbal autistics are far more engaged in the world than observers have assumed.

Her rethinking urges patients and parents to build on individual strengths in order to “change the brain to do what it does best.” Right now, the medical and educational focus on deficits is intense and automatic. The 10 year olds whom Dr. Grandin meets all want to talk about “my Asperger’s.”

“I’d rather hear about ‘my science project,’ or ‘what I want to be when I grow up.’ I want to hear about their interests, their strengths, their hopes.”

Autistics frequently display both disability and exceptional abilities—the savants, systemizers, lightning calculators, calendar prodigies, and mechanically gifted. Nowhere is this more apparent than in tech communities such as Silicon Valley or Bangalore, which report autism rates 10 times higher than the general population.

Engineers, who understand the world in superb detail, aren’t the only technical-minded people who possibly harbor autism genes. Others grasp patterns inherent in nature, technology, math, and music that elude the rest of us.

Dr. Grandin’s hard won status as a Ph.D. and the world’s most famous high-functioning adult with autism makes her worry about the 50,000 people on the autism spectrum who turn 18 every year in the U.S. alone.

Their attention to and obsession with details could be channeled into relevant career skills. For example, airport security screeners whose job requires them to pick out details quickly may easily become bored and fatigued. But Aspies love repetition and resist unexpected change. Aspies love jobs where every day is the same thing, whereas most people loathe that.

While acknowledging that Aspies need coaching in workplace social skills, Dr. Grandin offers lists of possible jobs for her categories of thinking self: the “picture thinkers,” “word/fact thinkers,” “pattern thinkers.” Coupled with autistics’ typically hefty memory, their different styles of associative thinking may give bottom-up, details-first individuals a leg up on creative breakthroughs because, “we don’t know where we’re going,” and “expect surprises.”

Dr. Grandin has the grace to acknowledge errors in the face of new evidence. She had previously assumed that the photo–realistic style of reasoning in which one image leads to another (described in her 1995 Thinking in Pictures) was how all autistic individuals reasoned. New research reveals individuals with a spatially–organized point of reference, whereas the visualizers now split into “picture thinkers” and “pattern thinkers.”

Remarkably, she shares her own brain imaging studies––from the latest High Definition Fiber Tracking to longitudinal structural studies that look for anatomical changes over time. She takes an oversized amygdala, for example, to explain her pervasive fear. Of her newfound knowledge she says, “I like knowing . . . the threat isn’t real. The feeling of the threat is real—and that’s a huge difference.”

Similarly, her visual tract is enormous, 400% larger than controls, whereas a visual–auditory connection by comparison measures a puny 1%. Perhaps, she muses, this accounts for the childhood stuttering and speech delay that she described in Emergence.

In spite of such thought provoking findings, however, Dr. Grandin reminds us that autistic brains everywhere are for the most part structurally normal.

Given the book’s river of information it is perhaps churlish to point out flaws. She overgeneralizes. She is out of her depth when discussing painters and composers. We are told they used patterns and formulas, but are given no evidence to judge for ourselves.

There are jarring instances of hyperbole (“Now that, I thought, is a mind-blower,” or “As a biologist, I’m freaking out, it’s so cool”).

And she seems unaware of the mechanics of coup-countercoup head injuries: If bopped on the head, the damage lies not directly beneath the impact but 180 degrees opposite it—a rookie mistake for someone discussing the brain.

There is more wealth than room to discuss it. In The Autistic Brain Dr. Grandin bores deep into genetic details, discusses the role that high levels of testosterone in the womb may play in the development of both technically oriented and autistic minds, and even takes on the infamous vaccine imbroglio.

In all of this Temple Grandin has yet again been of enormous service to the millions of autistic individuals worldwide, to anyone labeled with a disability, and to the rest of us curious about the brain and the intricacies of human experience.

Interview with Temple Grandin, author of The Autistic Brain

For more on this topic read reviewer Richard Cytowic's article The Maddening Normality of Autistic Brains at Psychology Today.