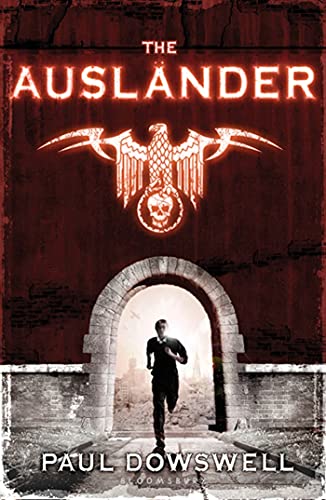 “The Auslander is a powerful piece of young adult fiction that appeals just as comfortably to adult readers.”

Paul Dowswell proffers an intriguing young adult novel of a Polish boy’s experiences in the Hitler Youth program, his gradual recognition of the inherent evil in Nazi philosophy, and his brave actions to deter it.

Mr. Dowswell is a talented writer. His protagonist is well developed, although secondary characters lack clear definition. As well, his descriptions of wartime Germany are vivid and evocative. This novel has exceptional pace and timing.

We are drawn into the mind of Piotr Bruck, a young Polish boy whose German father and Polish mother provide an excellent, warm home for their only child just before Germany invades Poland in 1939.

As the story begins, Piotr’s parents are killed in their car when it is destroyed by a German tank. Piotr is sent to an orphanage in Warsaw. Suddenly removed from his parents’ love and their comfortable family farm, Piotr is a destitute orphan, left to fend for himself just as his adolescent years begin. Author Dowswell offers a wealth of colorful images and allegory, as the reader begins to experience Piotr’s desperation and sadness.

Feeling abandoned and forlorn, Piotr grows deeply frightened and morose. Upon examination by Nazis, it is determined that Piotr’s blond hair and blue eyes make him emblematic of the pure Aryan boy envisioned by Nazi propagandists. With this in mind, a prominent German family decides to adopt the young Pole. His “new” father is a high level operative in the Nazi Race & Resettlement Bureau.

The entire family is enveloped within the strict culture of Nazi Germany and Aryan superiority. They despise Jews and other “lesser species of humanity.” They merrily hang swastikas on their Christmas tree while millions of innocent people face brutality, starvation, forced labor, and murder in Nazi concentration camps.

Piotr has fallen into a family of rabid Nazis. They change his name from Piotr to “Peter.” He has no choice about it. Peter obeys their austere commands and joins the iconic Hitler Youth, the Hitler Jugend. There, he is taught to detest Jews, Poles, Russians, Communists, and all manner of people proclaimed lower forms of humanity. At first, the propaganda works. But over time, Peter begins to wonder why Nazis are required to hate and incarcerate Jews and other innocents.

Peter gradually begins to question the strict Nazi culture from the viewpoint of an “Auslander,” a foreigner. Mr. Dowswell explores the escalating feelings of a young boy on the verge of being accepted into the bold, new society of Nazi Germany. Here is a story of deep penetrating desire to be accepted by his new family conflicting with the constant feeling that something is not right about the Nazi edicts and its frightening consequences.

In a turning point, Peter falls in love with Anna, a lovely girl whose father is a high-ranking Wehrmacht officer. At first it seems impossible that Peter, whose attitude toward Nazi culture is changing so drastically, could find common ground with such a staunchly Nazi family. But beneath the slick veneer of Anna’s family presence lies an amazing truth: Anna and her parents despise the Nazis. They are helping Jewish families in hiding, doing whatever they can to stop them.

Together, they engage in helping to conceal and feed Jews. Eventually they are discovered. Missing in this portion of the story is any clear definition of the burgeoning physical attraction between Peter and Anna. The reader is left to guess whether their relationship is platonic, sexual or both.

The Auslander is a powerful piece of young adult fiction that appeals just as comfortably to adult readers. Mr. Dowswell provides a wonderful character study of an average Polish boy searching for the resolve to fight Nazi propaganda and help victims of persecution.

The Auslander will be remembered long after its covers are closed.