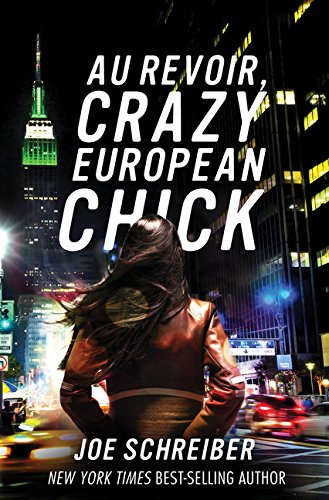 “Joe Schreiber has created an acutely teen-focused action thriller that blurs the line between gender and age, making it an enjoyable book for almost anyone.”

In his first young adult novel, Joe Schreiber has penned one of the most high intensity thrillers of the year. Au Revoir Crazy European Chick is a plot-driven ball of female-fueled fury that takes place on the streets of New York City and is replete with espionage, explosions, car chases, raining bullets, revenge killing, torture, and a kiss or two thrown in for good measure. To say it’s action-packed would be an understatement.

Perry Stormaire is a normal high-school senior who is stressing over getting into college. Slated to be a big time Manhattan lawyer like his father, Perry is feeling the pressure to get accepted into Columbia and throughout the school year, has been forced to make a lot of concessions—like quitting his beloved swim team to join the debate team—all in the name of higher education.

When Perry’s parents ask him to make one of the biggest sacrifices of his life—taking Gobi Zaksauskas, their ϋber geeky, Lithuanian exchange student to the prom, instead of playing a once-in-a-lifetime gig with his band—Perry puts his foot down. Then he begrudgingly takes Gobi to the prom.

When Gobi descends the stairs in a horrifying fashion faux pas, which she defends as traditional formal wear in her country, Perry doesn’t think the night can get any worse; but he’s wrong. Dead wrong. As the night progresses, Perry will learn that his dowdy, wallflower housemate is actually a smoking hot, 24-year-old assassin who plans to avenge her sister’s death in a very big and messy way.

No doubt written with the big screen in mind, Mr. Schreiber sets the stage with his words and the free-flowing, vivid visuals automatically follow. Additionally, each chapter begins with a question from top college applications, serving to add wit and dark humor to the utter chaos that Perry is experiencing and how his application would read when compared to the mundane lives of other high-school seniors.

The book is being touted by the publisher’s publicity department as Ferris Bueller meets La Femme Nikita, which is a somewhat valid assessment but only in the way that Gobi is an assassin bent on revenge and Perry channels Ferris’ reticent best friend Cam. A more likely comparison would be Risky Business meets Collateral Damage, where cab driver Max (Jamie Foxx) is forced to chauffeur contract killer Vincent (Tom Cruise) through L.A. as he takes down his targets one by one.

In addition to being the reluctant driver/hostage, Perry begins a sort of coming-of-age transformation, seeing past Gobi’s actions and learning to be his own man.

Despite being a main focal point of the story, Gobi is interesting and exciting, but not as fleshed out as she should be; as such, she plays out more as a means to an end than a contributing, solid character—though that might change in the sequel.

Although Au Revoir Crazy European Chick tips the scales a bit in the believability department, it’s all in the name of good fun and high entertainment. Joe Schreiber has created an acutely teen-focused action thriller that blurs the line between gender and age, making it an enjoyable book for almost anyone.