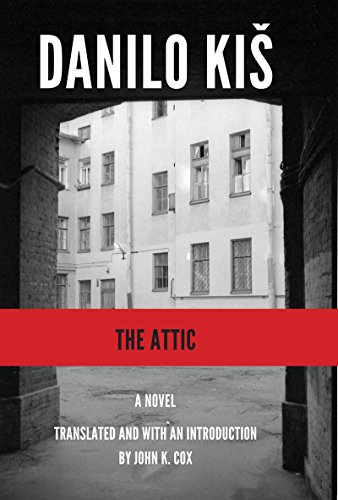 The passage from adolescence to adulthood is often emotionally tumultuous and all the more so when the young person realizes that he or she has an artistic calling. How will I earn a living? Will it leave me time to pursue my art? And if I somehow manage to accomplish those two will I have time and mental energy left for a love life and perhaps eventually children?

That is the predicament facing Orpheus, the nickname of the first person narrator and protagonist of The Attic: A Satirical Poem, the 1960 novella and first book by the then 25-year-old Danilo Kiš, a Yugoslavian writer who was first introduced to Anglophone readers in the 1970s when his novel-like book of linked short stories A Tomb for Boris Davidovich was included in the series Writers from the Other Europe edited by Philip Roth.

The Attic resembles many classic coming of age novels of world literature and like Voltaire’s Candide has a sarcastic tone. According to The Attic’s translator John K. Cox it is the most humorous of Mr. Kiš’ novels.

The book is a highly inventive, imaginative, and partly autobiographical account of bohemian life in Belgrade and the Adriatic Coast in the 1950s; its Serbo-Croatian title Mansarda can also be translated as The Garret. One detail, for example, from Mr. Kiš’ own life in Belgrade when he was in his early twenties that he passes on to his fictional Orpheus is his having given English lessons to sex workers and taken payment in kind. Teaching languages apparently agreed with Mr. Kiš; from the 1970s until his death from lung cancer in Paris in 1989 he taught Serbo-Croatian in French universities.

Orpheus is an aspiring writer (near the end of the book we learn he is writing the book we are reading), a musician who plays the lute, a romantic dreamer, and an unreliable narrator in that we never can be sure what part of the action is real and what is imaginary. He shares an attic, the top floor of a large apartment building, with his perpetual student friend Igor, an astronomer whose nickname is Billy Wiseass.

Orpheus wins the heart of a young lady he nicknames Eurydice only to lose her when she questions his grasp of reality and realizes that his first love is his art. Unlike the mythological Eurydice our hero’s former girlfriend lives, but Orpheus falls into a profound depression in which, unlike his namesake in Hades, he does not find and retrieve his beloved.

To heal his broken heart he takes a trip to a tropical island paradise in the fictional Bay of Dolphins and lives among the local indigenous people, a chapter that includes and perhaps is meant to satirize various Western preconceptions about tribal people.

Back in Belgrade he finds that the building’s cleaning lady has fallen for Igor who has moved out. Art and love continue to be in conflict, and Orpheus sells his lute.

In a six-page riff on a passage from Thomas Mann’s The Magic Mountain in which Mann alternates between French and German Mr. Kiš keeps Mann’s French and replaces the German with his own satirical Serbian. Mr. Cox likewise retains the French and translates Mr. Kiš’ Serbian into English. Readers who don’t read French, don’t have the patience to use online translation, or don’t have a copy of The Magic Mountain can skip ahead to the beginning of the next chapter.

To test whether they can handle adult responsibilities Orpheus and Igor buy and run a tavern on the Adriatic coast for which Orpheus creates a several pages long wine list and menu with satirical names; this is the first appearance of a documentary style that Mr. Kiš would employ in his fiction in the years to come. The tavern is initially a success but then is destroyed by a bar brawl.

Orpheus concludes there is nowhere to go except back to the island in The Bay of Dolphins which Igor considers a figment of Orpheus’ imagination. There follows a three page long diary of his solitary two-week–long survey of the island.

Back in Belgrade again, Orpheus converses with someone named Osip whose account of how he stole a fur coat convinces Orpheus that crime is no solution to his financial predicament. Orpheus tells Osip that he (Orpheus) is writing The Attic and quotes its lyrical opening:

I listened to invisible trains weeping in the night and to crackly leaves latching onto the hard, frozen earth with their fingernails. . . .

Orpheus returns to his garret and resumes writing The Attic when he is distracted by a child crying in an apartment in one of the lower floors. He goes downstairs and takes an inventory of his neighbors in the apartment building creating a several pages long list of the names, ages, and occupations of each floor’s tenants.

The list is another example of Mr. Kiš’ documentary style, but this time without satire or sarcasm. The contrast between The Attic’s lyrical opening and the prosaic list in its concluding chapter represents a shift from the imaginary to the real in Orpheus’ mindset as well as a turn outwards in his attention from his previous narcissism.

Mr. Kiš began writing The Attic in November 1959, took a three to four week break in January and/or February 1960 to write his second novella Psalm 44 (also reviewed in NYJB), which takes place in Auschwitz (where his father was murdered), for a Jewish literary contest with a tight deadline, and finished The Attic in March 1960.

Readers who are aware of this chronology may wonder whether Psalm 44’s gravely serious subject matter is in part responsible for the more sober tone of Mr. Kiš’s writing and of Orpheus’ disposition in The Attic’s concluding chapters.

This synopsis does not capture The Attic’s delightful tongue-in-cheek wit and sense of whimsy. It is recommended to readers who enjoy foreign literature in translation and the bildungsroman or coming of age subgenre, as well as to fans of Mr. Kiš’ writing who want to experience his earliest work.

The Attic and Psalm 44 are now being published in English translation for the first time simultaneously with The Lute and the Scars (also reviewed in New York Journal of Books), a collection of Mr. Kiš’ short stories written two decades later in the early to mid-1980s.