Atomic Days: The Untold Story of the Most Toxic Place in America 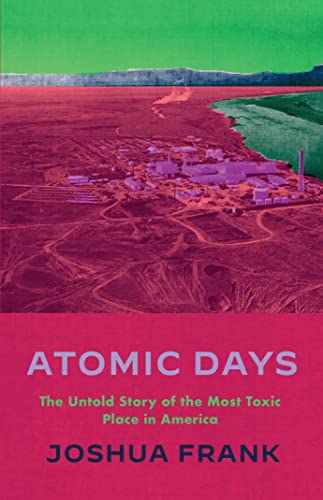 Joshua Frank’s ballsy tell-all of the Hanford pillaging of the American people’s pocketbooks, while as the same time, never achieving the one objective the government contractors were hired to do—environmental remediation of the nuclear waste products—is as compelling as anything you will ever read. Atomic Days: The Untold Story of the Most Toxic Place in America is ten stars, a must read!

Hanford produced all of the plutonium for the nuclear bombs that devasted the Japanese people in World War II and is the most toxic place in the United States, with a ticking bomb of radioactive nuclear waste dripping toward the Columbia River. Its location next to a major source for fisheries and a seismically active area make it a 21st century ecological disaster waiting to happen. “Now, Hanford no longer produces plutonium. Instead, it’s a sprawling wasteland of radioactive and chemical sewage, a landmass three times larger than Lake Tahoe. It’s the costliest environmental remediation project the world has even seen, and arguably the most contaminated place on the entire planet.”

“Richland was born of the United States nuclear ambitions during World War II and is still very much run like a covert military operation, fully dependent on government contracts to keep its economy steaming ahead.”

The shelf life of nuclear waste is hundreds of thousands to millions of years, and the costs of cleanup keep escalating, but the majority of the radioactive material still sits right where it’s always been at the Hanford site. “Six years ago, the Department of Energy estimated the total cost of cleanup was one hundred-ten billion. Today, over two billion is being spent annually. Each presidential administration passes the buck on the environmental cleanup of Hanford. The Trump Administration promoted reclassifying the radioactive waste from a high level to a low-level risk, for cost reduction purposes. The Biden Administration has been reluctant to approve additional funds to clean up the Hanford site, owning largely to the cozy relationship all of the military contractors have with lobbying inside the beltway.

The Government Accountability Organization has repeatedly found gross errors, overcharging, and flawed science from Bechtel’s work. Spectacular risky failures of the government contractor include a leaky grout, for which taxpayers paid two hundred million dollars, to secure the leaking tanks holding the radioactive sludge, and failed. The Department of Energy was unable to show the underground storage units were safe for the environment or human health, yet it allowed this approach to proceed. Let that sink in, the federal agency responsible for securing the material doesn’t have a reliable plan to complete the job.

Lest you think this is a local issue in a small desert community in the “other Washington,” radioactive materials from Hanford have made it as far as the Midwest via wind. In 2017, demolition of the old plutonium finishing plant was stopped because radioactive dust became airborne, and hundreds of workers were exposed. So what happens at Hanford doesn’t necessarily stay there because of weather patterns. The lack of transparency and full accountability of the practices regarding the Hanford cleanup are exacerbated by off-site subcontractors who have even fewer safeguards, notably the fire at Perma-fix Northwest in May 2019, which wasn’t reported to state regulators.

If the Chernoble-esque melt-down risk of the Hanford site isn’t horrific enough, it gets worse, Joshua Frank’s thorough research shows that both the Department of Energy and the Hanford military contractors deliberately subjected their employees to radioactive exposure, without protective gear, for years, and tried to deny the health impacts. Rotten to the core, government at its worst, and if it wasn’t for the Government Accountability Office, which has red-lighted problems at Hanford and successfully led to some program cuts, one could lose all faith in this country.

As riveting and dark as Atomic Days: The Untold Story of the Most Toxic Place in America, there are high points that provide some daylight, most importantly the work of Yakama leader Russell Jim who ground away at the DOE, enlisting the help of the Nez Perce and the Umatilla as well to enforce their treaty rights. First Nations people cannot be dismissed as easily as the states, which are subject to the DOE and other federal rules, because they are sovereign nations within the U.S. And private subcontractors have spoken up, like Murray Thorsen of URS, forcing changes.

In 2003, Washington State sued the DOE to prevent it from sending uranium waste from other states to Hanford. And in 2018, the Trump Administration and the Department of Energy sued Washington State for its new worker protection law, which made it easier for Hanford employees to get compensation for health problems due to their exposure at Hanford. In 2021, the Biden Administration appealed the Ninth Circuit ruling to the Supreme Court, contesting the federal government’s responsibility to pay former employees for healthcare harm done while working at Hanford.

Whistleblowers at Hanford have been subjected to threats, chemical exposure, and career ending moves by government contractors and representatives from the U.S. military. A King-5 News investigation in 2016 found that Hanford officials lied about their own internal sampling of tank vapor emissions. Ed Bricker, for example, was ground down to a $200,000 settlement for wrongful dismissal after four years—pennies. Other heroes abound and make this read less painful. Frank does a herculean job identifying those who are trying to help, and his last chapter provides a roadmap to fixing this mess if we can regain control of our government of the people for the people and by the people.

The masterfulness of Frank’s work is Pulitzer Prize award-worthy. The United States embraced nuclear weapons without any technology to safely contain the radioactive waste, and now we are all living on borrowed time.