Asylum: A Survivor's Flight from Nazi-Occupied Vienna Through Wartime France 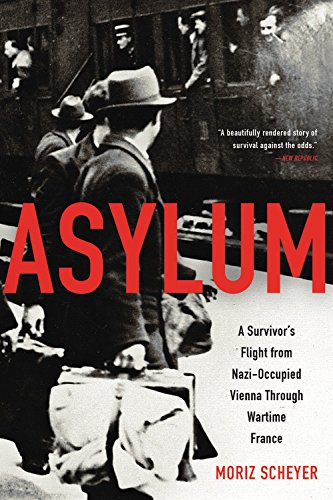 “And with every day that passes you become poorer within, the internal frost becomes sharper, the heart hardens. Yes, you are alive. But in order to stay alive—in order to have at least a chance of surviving—you allow yourself to die, bit by bit.”
—Moriz Scheyer

Nazi Germany captured Austria rapidly in 1938’s Anschluss. Moriz Scheyer suddenly became, like every other Jew, a dangerous non-person, an enemy of the state. In a brief moment of time, Scheyer lost his job, his home, his property, and his freedom.

This is the gripping tale of a successful, well-educated, and happy Jewish writer and his wife, forced to flee Austria into what they perceived to be the safety of France. That safety was tenuous and brief. Soon Germany occupied nearly all of France, leaving the Vichy to oversee portions of southern and eastern France.

Scheyer and his wife move from Paris to this “safe” zone; but Moriz is soon arrested for being a Jew and sent to a concentration camp. There, he is deeply humiliated, beaten, and starved. Throughout this time, Nazis and French citizens maintain a blind eye to various atrocities against Jews. Very few are rescued and hidden from the Gestapo and Nazi troops.

During the next seven horrific years, Scheyer and his wife are treated like criminals. He is sent from one Nazi prison camp to another, coinciding with perfidious violence which he neither deserves nor is able to easily survive. His wife often has no idea where Moriz is, whether he is safe or healthy or if he will return at all.

In a world that has suddenly turned into genocide against Jews, French resistors offer them kindness and generosity. Eventually, they are hidden in a large asylum run by the Catholic Church. During this time, they become friends with the nuns, and they also befriend members of the French resistance, including the Maquis. They live in a huge hospital/asylum that is surrounded by German troops and Nazi sympathizers. To be seen anywhere outside of their room in the asylum is to invite capture, brutality, and death.

Asylum is terrifying, mesmerizing, enthralling, and inspiring. Unlike most survivors of a horrific event, who produce a mediocre chronicle based upon limited writing talent, Scheyer freely draws upon his linguistic aptitude to deliver a story that reads much more like a novel than a memoir. Scheyer helps readers feel as if they are experiencing the story themselves.

Unlike most memoir authors, who write about an experience years later, Scheyer writes this memoir as events occur around him. After the war, he does not need to rely upon memory. The story is virtually done, minus editing and translation. Most memoir authors must depend upon a shaky memory, which can often rely too much upon the heavy influence of confabulation. But this tale is virtually completed when the war ends, lending a greater degree of accuracy and authenticity that many memoir authors miss.

Kudos to the publisher for adding pictures and documents in the afterword. Visual learners will find this adds greatly to the memoir’s quality. There is also an epilogue provided by the author’s step-grandson, which enriches the quality and adds depth.

Humans have a short lifetime of memories. Without some written record, these events could be forgotten within one or two generations. But the courage, perseverance, and dedication by French gentiles must not fall into historical darkness. In producing this critical account, the author and his step-grandson insure that the courage of Moriz Scheyer, his wife, and housekeeper, and members of the French resistance, will not soon vanish into oblivion.