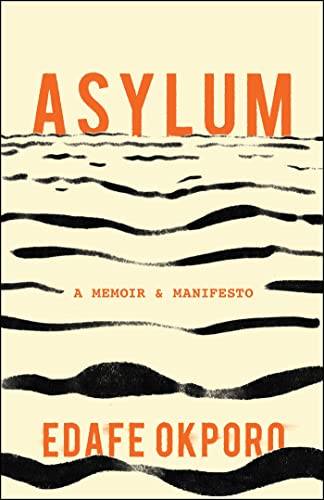 Part memoir, part polemic, Edake Okporo’s Asylum is the harrowing story of one gay man’s treacherous youth in a violently homophobic country and his subsequent experience as an asylum seeker in the United States. Okporo’s goal is not merely to recount the traumas he suffered, but to offer a challenge to our current system of dealing with black and brown asylum seekers.

In Warri, the Southern Nigerian district where Okporo was raised, the rules of gender-appropriate behavior are very strict. Men and women must adhere to what their society expects of them. Homosexuality, the cardinal violation of appropriate masculine behavior, must be beaten out of a person. Worse, it leaves a stain on the homosexual’s family who are seen as failures as parents. The Same-Sex Marriage Prohibition Act of 2014 made homosexual acts punishable by up to 14 years in prison. The Draconian penalties for homosexuality were a vestige of colonial law now supported by money and lobbying from American evangelical groups. Failing to keep their own country free from gay rights, they work to maintain African prejudice and anti-homosexual legislation in Africa.

Nigerian anti-gay prejudice and the resulting harsh laws lead to blackmail and various forms of entrapment for gay men. Many left villages and small towns for cities like Lagos and Abuja, where they found other people like them, but were only marginally safer. AIDS, too, was a constant danger to men who lived outside of society and whose sexual encounters had to be furtive. Stable relationships were impossible.

Okporo suffered all of the traumatic experiences of being a gay man in Nigeria. Self-hatred led him to become an evangelical minister, but his faith and his position could not protect him from his attraction to men. From his teen years, he experienced blackmail and entrapment. Later, as someone who dared to work for an organization devoted to health care for gay men, he became a target for attacks and death threats from heterosexual citizens and the police. When word got out that he won an award from an American human rights group for his work on behalf of gay men, he had no choice but to leave Nigeria.

Perhaps naively, Okporo set out for America, a country that had abolished its anti-sodomy laws and had recently legalized gay marriage. Surely, he thought, the United States would accept a man who whose life was in danger in his home country because of his sexual orientation. The reality was shockingly different. When he requested asylum at Kennedy Airport, he was put in handcuffs and sent to a detention center. Thanks to a devoted lawyer, after almost half a year going through the torturous legal system, he walked out free to live in the United States, but as a man without money or a job. Though he was college-educated, he was offered only the most menial of positions.

Okporo’s story has a happy ending. In Nigeria, he was an advocate for his LGBTQ+ community. In the United States, he built a career as an advocate for refugees and asylum seekers, particularly people of color who have found themselves less and less welcome in the United States. After experiencing the racism in the American gay community, he found a devoted partner. The scars from the traumas he suffered are still there, but Okporo leads a productive, happy life.

In coming from Nigeria to the United States, Okporo moved from being ostracized for being a gay man in a brutally homophobic society to suffering indignities as a Black man in a racist society. In the final chapters of Asylum, Okporo offers a challenge to the American immigration system that has become more and more challenging to people of color. Refugees are treated like criminals from the moment they seek asylum. They are placed in for-profit detention centers that offer minimal health care and ask the inhabitants to do most of the menial work to pay for their housing. If they are fortunate enough to be allowed to stay in the country, they find themselves homeless and jobless. The scant help they receive comes from generous citizens and non-government groups who never have enough resources to take care of all the refugees. Can the United States be the “beacon of hope” it claims to be?

Asylum is an eloquent, powerful, sometimes harrowing chronicle of what it means to be a gay man in a violently homophobic country and what it means to be a Black asylum seeker in our “land of the free.” The book is also a stirring record of the suffering and healing of a courageous young man who is a born leader.