The Astronomer: A Novel of Suspense 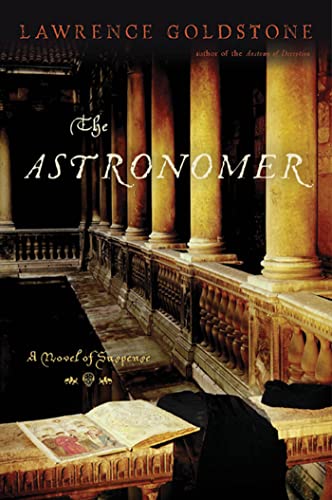 It’s impossible to avoid comparisons between The Astronomer, Lawrence Goldstone’s deft historical thriller, and that familiar blockbuster, The Da Vinci Code by Dan Brown. Both take place mostly in France, begin with the murder of a good man, involve dangerous religious sects and a physically repellent zealot, have much spying on all sides, and feature several heart-pounding escapes. Dan Brown’s book was set in the twentieth century, but Mr. Goldstone planted his thriller in the sixteenth, which brings to mind that old saying about Ginger Rogers and Fred Astaire—she did everything he did, only backwards and in high heels.

The story begins with the brutal death of a monastery student who’d been on a mission for the Catholic Inquisition. The student’s good friend, Amaury de Faverges, is recruited to take his place. Amaury is an unlikely replacement, for he is an unrepentant rule-breaker, sneaking out of the monastery at odd hours in order to read scientific treatises at a local bookstore. But it’s this relationship with the bookseller that causes the authorities to choose him. The bookseller is a suspected Lutheran, and the authorities hope this connection will help Amaury infiltrate the Lutheran brotherhood. Secondly, the authorities know that Amaury has a quick scientific mind, and what the church is trying to uncover is a scientific discovery that the Lutherans threaten to make public—a treatise that could threaten the very basis of all Christian belief.

Mr. Goldstone couldn’t have chosen a more religiously chaotic setting than the early sixteenth century. Martin Luther had already posted his 95 theses on the door of a Wittenberg church, and King Henry VIII had recently broken from Rome. The established religious authorities, under attack on so many fronts, have grown suspicious of any threat to Christian dogma. Furthermore, the Protestants, not united by any strong central authority, are splintering into sects that compete with each other for the hearts and minds of disaffected Catholics.

Mr. Goldstone takes full advantage of these fractured loyalties to weave a story full of ambiguities. This is a particularly masterful bit of footwork, because the reader, being of the twenty-first century, will quickly figure out the nature of the scientific discovery that forms the central mystery of the novel. It’s the uncertain allegiances that give rise to the narrative tension: No character is quite what he or she seems, and because of that, the plotline takes a number of pleasantly surprising twists. The author manages all of this while depicting sixteenth-century Europe effortlessly—though he must have done massive amounts of research.

Clever, fast-moving, and richly depicted, The Astronomer is the kind of book that makes you forget about dinner—until you smell the chicken burning in the oven.