The Astronomer and the Witch: Johannes Kepler's Fight for his Mother 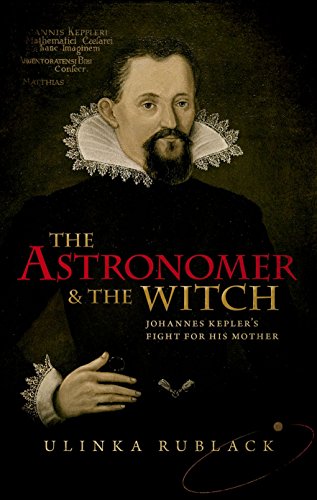 “Rublack creates an astute and informative study of witchcraft and witch trials.”

The Astronomer and The Witch by Ulinka Rublack at first glance may appear to be a book for history scholars. After all, the author is a well-regarded University of Cambridge don and has written several other academic books. But this book holds many surprises.

Far from dry academic discourse, it is a scintillating read, presenting a fascinating depiction of Johannes Kepler’s 17th century world, a time in Europe of great discoveries and intellectual ferment. Kepler, with his astronomical theses and philosophical canniness, was a well-known intellectual leader with a great many followers. In fact he is one of our most famous scientists.

“Fired by his fascination with cosmic constellations, Kepler, in 1606, published his treatise, De Stella Nova. It reflected on a recent supernova, which he regarded as a new star. The star’s significance lay in the fact that it had appeared close to the conjunction of Mars, Jupiter, and Saturn in the sign of Sagittarius. Kepler enthusiastically presented the age he lived in as positively influenced by this very special planetary conjunction. The universe beyond the Moon and planets was mutable. Unlike automatic clocks, which he admired for their enactment of regularity but criticized for their inability to reflect change, God’s world could thus be dynamic, surprising illuminating and varied, if people kept on positively responding to the possibilities of their time.”

You may justifiably ask how such a forward thinking and progressive man could also believe in witchcraft. As Rublack explains, Kepler believed all humans were “tiny specks of dust” who carried God’s image inside them and continued the work of divine creation.

In this worldview those who questioned Christendom were agents of demons and summarily victimized. Witches were the most unsavory manifestations of Satanic influence to undermine God’s divine creation.

Against this background, Rublack creates an astute and informative study of witchcraft and witch trials. Rublack’s meticulous scholarship immerses us into Kepler’s social and cultural milieu. In telling Kepler’s story—his six-year defense of his mother, Katharina Kepler, at her witchcraft trial—Rublack’s prose engrosses with intimate portrayals of village life, family life, prevailing beliefs, and local governance and legal practices. We learn why witchcraft was part of the 17th century mindset and why people feared witches so fiercely. For these people witchcraft was a fact of life.

For decades, Kepler and his mother had a vexed relationship arising from their conflicting personalities. Yet, without question, and despite all his many academic and other commitments, he came to her defense when she was accused of witchcraft and threatened with imprisonment or death. For six years he prevailed upon his connections in high society and government to gain support for his defense. In 1621 he appeared at her final trial.

“Despite Kepler’s attempt in public to present himself as civilized man of reason, he once more struggled to control his fury about Katharina’s criminal trial. Kepler knew he had to convince the Tübingen professors of law that, above all, his family had become victims of failed governance. . . . Kepler developed an implicit analogy between Leonberg’s governor as the ‘moon’ and Duke John Frederick and his ducal council as ‘the sun.’ As the moon had constantly become smaller, it had begun to reflect the sun’s rays only weakly and then completely disappeared. Finally it had covered the sun with darkness to fully eclipse good government.”

Rublack asserts that Kepler was right: Most Württemberg witchcraft trials and the majority of those that ended in a death sentence were prosecuted during John Frederick’s reign (1608–1628), which suggests that he insufficiently controlled his governors. “Ultimately Katharina was unlocked from her iron chain and set free . . . after fourteen months of incarceration under the severest of conditions.”

In the book’s epilogue, Rublack travels to Eltingen, the village in which Katharina was born, and begins her research by reading original trial papers. She also delves into the Third Reich’s fascination with this period in Germany’s history.

The final chapter is the crown to Rublack’s previous achievements in The Astronomer and The Witch. Here she offers an excellent and satisfactory summation of her findings and thoughts.