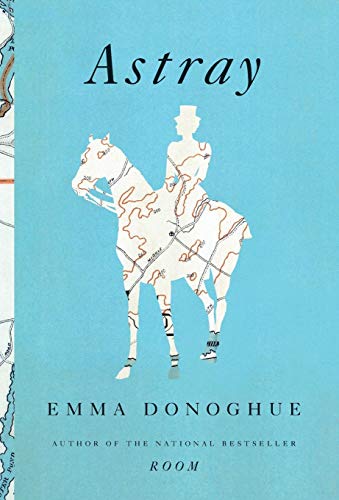 The setting is colonial New York City. A bachelor attorney is visited by a handsome, exotic young woman—a Sephardic Jew from Jamaica. She brings a melancholy story of her husband’s recent death in New England.

The attorney helps the shy, sheltered widow cash out her husband’s considerable estate. He falls in love with her and prepares himself for a marriage proposal.

Then unbeknownst to him she boards a ship and leaves town. He never proposes or even gets his fees paid. More remarkable still, the woman’s husband returns to New York a few days later. The woman played both men for patsies, her veneer of naiveté facilitating the swindle.

The story, “Counting the Days,” built from a real colonial newspaper account, is one of 14 fascinating stories in Emma Donoghue’s Astray.

The stories in Astray are fictionalized from real events pulled from old newspapers. Ms. Donoghue takes us to some exotic locales, i.e., London, Puritan New England, and the Saint Lawrence Valley.

But Ms. Donoghue’s most powerful accounts are more mundane: a slave and an unloved second wife on a modest Texas farm kill the owner, two hard-luck prospectors shiver through a brutal winter in a squalid cabin in the Yukon Territory.

Generally, Ms. Donoghue hitches to obscure old newspaper snippets and imagines rich, untold stories around them. A few times, however, she deviates: For example, in “The Body Swap,” she reimagines the criminal plot to kidnap Abraham Lincoln’s corpse a decade after his death, a story already told many times.

Another story, “The Gift,” is told in a series of letters concerning an impoverished mother’s attempt to recover her baby, Lila May Bell, taken from her as act of “charity.” In this story, Ms. Donoghue moonlights as an historian, reconstructing the fate of Lila from fragmentary historical evidence in a variety of sources.

But Ms. Donoghue is not an historian. A few times this results in stories that do not square with the facts. In “The Hunt,” for example, Ms. Donoghue imagines a young German mercenary serving in the British Army during the American Revolution. The boy falls in love with a girl from a rebel family.

But the author misunderstands the circumstances in which a young German soldier might be unleashed to plunder for the British Army, and similarly misunderstands the nature of inter-mingling between American, British, and Germans people war-torn in New Jersey in 1776. This story does not pass the “plausibility test” so critical for historical fiction.

In this way Astray is an easily misconstrued collection, and Ms. Donoghue perhaps does not always treat the past with appropriate respect. Yet this criticism is ultimately blunted by superior authorship.