Astonish Me: A novel 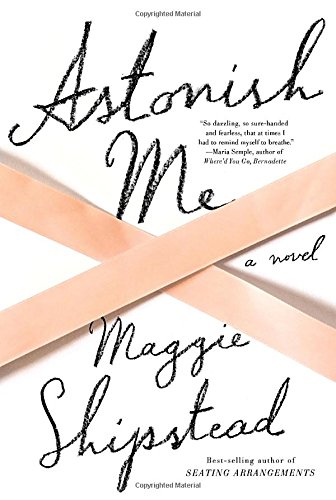 “‘The ballet is the result of endless repetitions: uncounted rehearsals of acts, of scenes, of combinations, of steps,’ Shipstead writes. So, she seems to be saying, is life.”

“Étonnez-moi, Diaghilev had said to his dancers in the Ballets Russes. Astonish Me.”

Astonish Me did, in the end, do just that. Author Maggie Shipstead clearly studied balle—either in practice or in theory—to write this book about the intertwined lives and loves in the competitive, often cutthroat, world of professional ballet.

At the center of the novel (although never center stage in a ballet) is Joan Joyce, infatuated with Russian ballet dancer, Arslan Rusakov, who selects Joan to help him defect to the United States. Arslan becomes a major star and soon dismisses Joan and marries a much more proficient—Russian—ballerina, who has also defected. Joan will not be so easily dismissed.

Shipstead captures the sights, sounds, even the smells of this world: “Sweat patters on the floor. A stagehand pushes an ammonia-smelling mop around . . . The surface of the stage has the dull shine of black ice; rosin dusts it like snow . . .” The narrative comes most alive during her descriptions of rehearsals and performances, perhaps because this is when her characters seem most alive.

With regret as a major theme, this is a somber read, the narrative a bit flat in places, an appropriate choice for this world of self-obsessed dancers, who seem to know themselves only when gazing into a mirror or to become whole when performing a pas-de-deux.

Jacob Bintz, Joan’s childhood friend, whom she marries and with whom she raises a son when Arslan rejects her, breathes fresh air into the narrative every time he appears. Heartwarmingly normal, he stands in refreshing counterpoint to the dancers’ world of sacrifice and deprivation, characters who only truly believe in their self-worth during the applause.

But even Jacob buys in to the illusion at first. When Joan decides to give up ballet to marry him, he realizes that “. . . her retirement means she has been reduced in some essential way. He will miss seeing her onstage, displayed so beautifully at the front of all that darkness . . .”

The son, Harry, grows up to become, no great surprise, a ballet dancer. As does his close childhood friend, Chloe. Shipstead shifts her story back and forth in time from the 1970s to the 1990s in what seems at first an arbitrary and even confusing manner—until the second half, when the tempo picks up and Shipstead’s story unfurls like a series of rapid chainé turns across a stage: precise, measured, and perfectly choreographed. The sacrifices the characters make seem almost noble.

Shipstead’s characters reside in a closed and incestuous world in which a person’s value is not based on who they are, but on how well they dance. That, in turn, is determined by body type. No matter how hard a dancer works, if the body is wrong, he or she will never be good enough. As a young Joan confides to Jacob, “I do ballet. I can’t be big or old.”

“The ballet is the result of endless repetitions: uncounted rehearsals of acts, of scenes, of combinations, of steps,” Shipstead writes. So, she seems to be saying, is life.