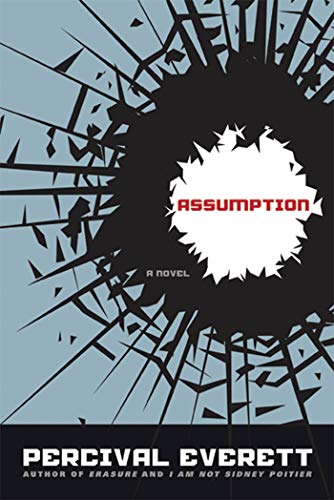 “The careful reader, the one who assumes nothing as s/he reads, will be the most satisfied. Assumption is a well-written mystery with an unexpected, rare, and unique ending.”

The smooth, quality prose in Assumption, Percival Everett’s detective novel, is not surprising since Mr. Everett is Distinguished Professor of English at the University of Southern California and author of 18 novels.

Yet surprises seem to be one of Everett’s specialties. The story of young Ogden Walker, the plodding deputy sheriff of a small, dusty town in New Mexico is vastly different from Mr. Everett’s last (critically acclaimed) comic novel, I Am Not Sidney Poitier.

Both Assumption’s New Mexico setting and its plot are carefully presented, e.g. chases up and down that state’s hills, dusty roads, and arid, empty plains. In Mr. Everett’s hands, the setting also echoes the frustration of many of the characters: How to get something done in a do-nothing environment.

In many ways Mr. Everett’s work is reminiscent of Tony Hillerman’s Navaho mysteries, not only in settings, but also in characterization. A few important characters in Assumption are very well drawn, especially the staff of the sheriff’s office and their families, and the prostitute who appears as the plot shifts to the lowlife in Denver and urban blight.

Deputy Ogden encounters a number of motley characters, all participating in creating a captivating plot. The action starts when a number of seemingly unrelated bodies start showing up in the formerly sleepy town and surrounding area. Several, if not most, characters are not what they seem to be, and suspicious readers looking for flawed character and odd situations will have added entertainment.

Reader, beware. The title, Assumption, is the key to the book. This applies to small details as well as large plot moves. For instance, Ogden’s mother attempts to comfort her son with food, yet he has no appetite whatsoever—a familiar situation certainly.
But readers should not assume they know the reason for his lack of appetite. Author Everett excels in making the familiar tale into ironic twists.

Furthermore, the title is important not only to the identification and integration of the book with its subject matter, but is also critical to the understanding of Mr. Everett’s message.

The careful reader, the one who assumes nothing as s/he reads, will be the most satisfied. Assumption is a well-written mystery with an unexpected, rare, and unique ending.