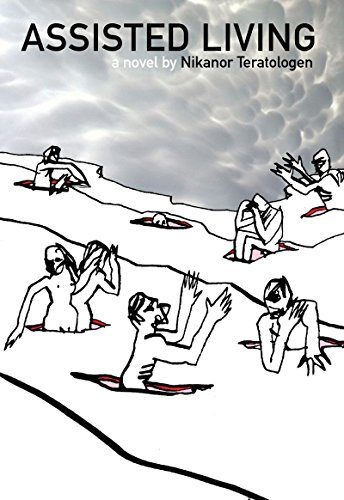 Stieg Larsson may have believed Sweden was infected with sinister conspiracies, but Nikanor Teratologen fears the evildoers probably live openly right next door.

Its main character is an incontinent, elderly (born the same day as Heinrich Himmler) yet puerile, militantly male chauvinist, female-phobic gay man who is also a pro-Nazi Aryan supremacist, an anti-intellectual bibliophile with an avid interest in European philosophy and post-modernist literature and theory, a substance abuser, an incestuous pedophile, a murderer, and a cannibal (!) living in rural northeast Sweden.

Indeed, as Stig Saeterbakken points out in the book’s afterword, were the details of the narrative not completely implausible and its two-dimensional characters not cartoonlike, the book would be unreadable.

On the other hand, because it is so over the top and its horrors so exaggerated, readers who appreciate warped, gallows humor may find parts of it funny despite the pervasive evil. Mr. Saeterbakken also reminds us that the reason we read horror stories and fairy tales is because they shock and disturb us, though few readers of those genres have ever encountered a character as Satanic as Mr. Teratologen’s Holger Holmlund (note the alliteration of the Hs as in Vladimir Nabokov’s pedophile protagonist Humbert Humbert), a.k.a. Grandpa Geezer.

An example of the book’s humor and of Mr. Holmlund’s Satanic evil is found in the following paragraph that describes his driving during a visit to Skellefteå, a local city:

“When the pedestrians thought they were safe, Grandpa did a burnout and hit two old women. They arced through the air clutching their handbags . . . Then Grandpa drove up on the sidewalk and hit a carriage. Mother Cluck threw herself into the street. ‘Crazed Driver’ is what the headline will say, but what’s wrong with having a little fun so long as you’re only hurting other people?”

The book’s main text is Helge’s account of his life as his maternal grandfather’s ward, companion, sex slave, and serial murder spree accomplice, a manuscript found among the eleven-year-old’s possessions by a friend of the author (whom Mr. Teratologen describes as a “dear friend with exquisitely cruel tastes . . . a man of both honor and lust”) who had kidnapped, raped, murdered, and butchered the lad.

Knowing from the start how young Helge will die lends a certain poignancy to chilling scenes such as the one in which, following his grandfather’s orders, he lifts the remains of a boy his own age off a meat-hook, carries the cadaver up out of the cellar and into the backyard, lifts it onto his grandpa’s two meter long barbeque, and bastes it while it grills.

The failure of the police to trace Mr. Holmlund’s murder victims to his basement meat locker, and of truant officers and/or foster care caseworkers to look in on Helge are examples of the book’s above mentioned implausibilities; yet Mr. Holmlund does relate that the psychiatrists who’ve examined him “think I’m ‘an evil, phallic narcissist’ with ‘necrophiliac tendencies’ . . . A ‘schizophrenic solipsist’ filled with ‘demonic rage, an insane thirst for revenge, and a wild contempt for the entire human race’ . . .”

If so how did he ever get custody of a child? Answers are provided in the epilogue where a social worker claims to have received little support from the police who are described as half-wits unaware of fingerprints much less more advanced forensic techniques and who could never find corroborating witnesses.

In the main text Helge describes his relationship with his grandpa: “Being Grandpa’s child is like playing Russian roulette. Fear was doing a number on me, but there was no point in asking for help. I’m more afraid of Grandpa than anything else; that’s because I crave his love.”

The text would have been written when Helge was nine or ten, but its erudite, crude yet sophisticated prose style influenced by the Marquis de Sade, H. P. Lovecraft , Henry Miller, William Burroughs, Charles Bukowski, and its frequent use of ellipses in the manner of Louis-Ferdinand Céline—especially since he did not attend school and his grandfather discouraged him from reading (because it makes one soft-hearted, “Think and feel as little as possible, always be happy and gay! he commanded”)—is another implausibility; even its clever misspellings, entire phases spelled as one word, and ungrammatical sentence structure are winks and nods from the author to the reader. Interspersed amid the bigoted rants, abusive sex, and horrific violence are beautiful descriptions of northern Sweden’s nature and landscapes that can only be the work of a mature writer.

“Luther’s and Hitler’s table talk had nothing on Grandpa’s . . . his head’s a real randomgenerator.” Indeed, the names dropped by Grandpa Geezer are so numerous and arcane that each chapter ends with a glossary. Even highly educated readers may find that the glossaries include fewer than half the unfamiliar words and names.

Readers planning to apply to graduate school who look up every one of the book’s recondite words in the dictionary and commit their definitions to memory will probably improve their verbal GRE scores. Intellectually curious readers who look up every obscure name in Wikipedia and read each article in full will acquire quite an esoteric education touching on most of the disciplines in the humanities, natural and social sciences, including the biographies of several prominent writers who like Mr. Céline had fascist sympathies and collaborationist pasts as well as some of the middle-level S.S. officers who implemented the Holocaust in particular sectors of Eastern Europe.

Grandpa Geezer’s discourses are generously seasoned with racial and anti-Semitic epithets, but his most intense hatred is directed at women. Late in the novel during a magical-realist episode set on a friend’s farm his female-phobia takes the form of a barnyard animal with multiple vaginas all over its body.

Early in the novel he relates to Helge his belief in a mythological age in Sweden’s pre-history when northern Sweden was inhabited entirely by men who enjoyed a Dionysian lifestyle. Here is an excerpt condensed from his eight-page rant:

“—They spread like the plague . . . like gangrene . . . we were used to having things our own way, no regular mealtimes . . . letting it all hang out . . . minding our own business . . . no curfews, no responsibilities . . . just whim and will and almighty nature . . . God in heaven, if only the coastguard had blown them out of the water! Before it was too late . . . they got beneath our skin with gooeyeyedloveydoveyness . . . stumpylegged, narrowshouldered, steatopygic monsters with repulsively swollen breasts . . . How could respectable barbarians soil their cocks with that?!

“—One word, the foulest word there ever was, began to make the rounds: Cunt . . . they had cunts, people said, like little furry animals, smoother and softer than anuses, not as heathenishly narrow . . . All who tried it were sold . . . the Wound, the gaping, bloody, festering sore that wouldn’t close . . . They used cunts to take Norrland from us!

“. . . They were like lemmings! Modern men with real jobs and sound minds! fawning, prudish, lecherous cunts!...They brainwashed wounded prisoners of war and little boys alike! Taught them to love pussy! and everything else that makes life a living hell! Work! Sobriety! God and church! Law and order! . . . After the invasion of the caitiffs and shrews life became what it is now…predictable . . . mundane . . . soulless . . . They killed fantasy, honor, and ecstasy . . .”

Helge relates another of his grandpa’s orations, “For three whole days and nights all he did was sing the praises of massmurderers everywhere. He seemed to know most of them personally.”

And later he quizzes Helge,

Sadly, Assisted Living may appeal to literal minded, closeted and conflicted political and religious conservatives who see in Grandpa Geezer confirmation of their worst fears about their own sexuality.

With its cartoon-like characters and esoteric references this book’s most likely readers are socially awkward, intellectually curious geeks who frequent comic book conventions and have a taste for the bizarre and grotesque. Readers who have been victims of incest, pedophilia, or violent crime will probably want to avoid Assisted Living.