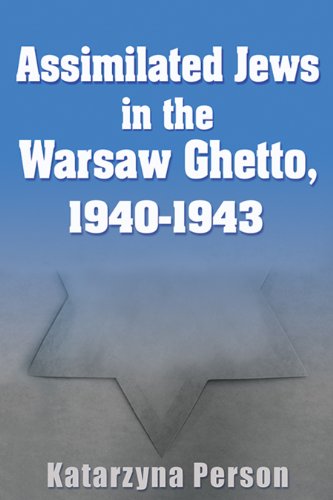 “Assimilated Jews in the Warsaw Ghetto is an excellent analysis of assimilated groups of Polish Jews who were forced to live together in the Warsaw ghetto from 1940–1943 with all other types of Jews.”

Assimilated Jews in the Warsaw Ghetto: 1940–1943 is a candid, academic analysis of the interrelationships among various types of Polish Jews under Nazi control.

Unnoticed by many researchers and historians, Warsaw Ghetto Jews were of many categories and varieties. From Ultra-Orthodox to agnostic and from PhDs to plumbers, there was no standard classification for these Jews. Instead, they represented every social strata, academic, scientific, and economic category and a diversity of religious affiliations. This book presents a focus upon Jews who had assimilated heavily into Polish Christian society prior to the Shoah.

Stripped of their rights and forced to live in coarse conditions, about 400,000 Jews from all ranks of life and religion were pushed together into this ghetto by Nazi Germany. Regular deportations to “camps in the East” signified an even worse destiny. By 1940 almost everyone had heard reliable rumors of Nazi genocide of Jews, primarily in Eastern and Southern Poland.

Within this roiling cauldron of abject terror, brutality, starvation, and disease, contrasting groups of Jews were forced to live together. This book meticulously details the characteristics, interactions and outcomes of assimilated Jews in the Warsaw Ghetto before Nazi Germany finally emptied the entire population into the gas chambers and ovens of Treblinka and Auschwitz.

Jews of the Warsaw Ghetto represented everything from the punitive volunteer Jewish police ordained by the Gestapo; Jewish leadership councils, held accountable for enforcing Nazi dictates within the ghetto; and various smaller groups of Jews whose affiliations were based upon their status before the ghetto.

Professors and professionals were combined with tradesmen and the unemployed. Assimilated and baptized Jews were in close proximity with Ultra-Orthodox. There were the traitorous Jewish ghetto police and there were the heroes of the Warsaw ghetto, fighting against Nazi tanks and artillery with grenades and pistols. And all fought and feared starvation and disease as much as Nazi deportation to a death camp.

Person’s research also includes the many varied interactions of Jews in the ethos of the Warsaw Ghetto. As Jews were heavily invested in Polish culture, including theater, music, education, civics, journalism, culture, and democracy, this book describes a variety of the widespread culture of Polish Jews within the Ghetto.

Katarzyna Person’s research on assimilated Jews within the Warsaw Ghetto is well referenced and it is solid in academic empirical evidence. Her references are clear, compelling and persuasive. Yet the book reads easily, unencumbered by sections of dry data or buried under layers of academic references.

The reader is left to admire the young Jewish fighting groups within the Ghetto, who fought the massive war material of Nazi Germany with Molotov cocktails, ancient guns and chutzpah. But the reader is also left to wonder who survived and if they continued to battle militarily against Nazi Germany. Perhaps that goes beyond the parameters of the author’s intent. Still the reader is left wondering which heroes of the Ghetto later joined with partisans to fight the Nazi menace.

For a well-researched, no-holds-barred analysis of assimilated Jews in the Warsaw Ghetto, this book is an excellent effort. That being said, the book would have been significantly enhanced by the addition of pictures, diagrams and maps. One wonders why the publisher did not add visual aids that are easily obtained and are not copyright-protected.

Additionally, the book barely touched upon the cadre of assimilated Jews that appeared to sometimes serve the needs of the Nazi government or the Gestapo, such as the singer and entertainer Vera Gran. There were a number of Jewish entertainers who either volunteered to entertain Nazis, or were forced into it. This still constitutes a hot-button for countless Jewish and Christian Poles who would rather have been put to death than entertain Nazis. Perhaps this too could be addressed in a second edition.

The assimilated Jews of the Warsaw Ghetto might appear just the same as their Christian neighbors, on one hand; but the definition of a Jew by Nazi Germany forced them into the same demise as religious Jews whom they or their ancestors had abandoned. Nazi Germany focused upon a racial (genetic) codex of who is a Jew and by how much. In the end, even the most baptized and religiously assimilated Jews of Poland became Nazi prisoners, destined for gas chambers and furnaces, just like their deeply religious counterparts.