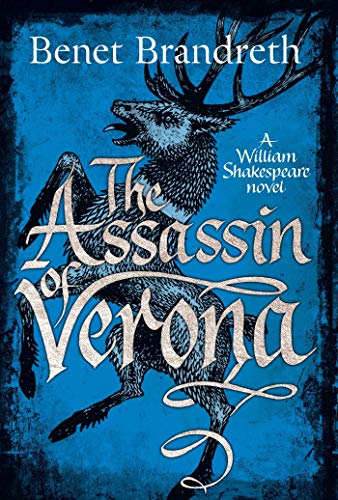 “As the rhetoric coach to the Royal Shakespeare Company, Brandreth has no need to ‘brush up on his Shakespeare,’ and his allusions and turns of phrase prove it.”

Having dispatched the assassin Prospero to prison, William Shakespeare, running from unlawful acts in Avon, now the pretend servant of an English ambassador, finds love, in the guise of Isabella Lisarro, Prospero’s former mistress. Indeed, he now wears the ring Isabella gave the assassin, a blatant sign he’s the replacement in her affection.

Too soon, however, Will is bereaved, for Isabella dies.

This unhappy event coincides with the advent of Father Thornhill, an English priest sent by the Pope to ferret out English spies, causing Oldcastle and Hemminges, still masquerading as the English embassy and his aide, to decide it’s time they made their way back to England to give the name of papal spies to the queen.

Driven near-mad with grief, Will refuses to go with them and is left behind.

“His howl had marked it. His howl and echoed howl, his desperate pressing of her hand, his call for her to come back to him, his declaration that it was too soon.  He could not see for his tears. He was not ready. He would never be ready.”

He wanders the countryside of Verona, taken in by a band of inept outlaws led by Orlando, a former duke seeking retribution against the stepbrother who killed Orlando’s father and framed him for the murder.

At the same time, Duke Leonardo entertains a gentleman he believes is the descendant of a famous English knight. Alas, it’s merely Oldcastle in another incarnation. Soon, Oldcastle, Hemminges, the Duke’s headstrong daughter Aemilia and her would-be lover Valentine, will be knee-deep in a conspiracy with Orlando and his group.

What could have been a comedy of errors becomes instead a tragedy of personalities as violent confrontations reshape the characters of those affected. William is transformed most of all.

“Who, then?”
Now there was a question. A player? A poet? A lover? A traveler rich in secret and surmises? A foolish boy far from home? What a piece of work is a man; to be so many things in one instant.”

Finding himself mistaken for Prospero, he becomes, whether intentional or contrived, the evil genius guiding others to their destruction.

“Turn your eye on yourself, William Shakespeare. You who see the minds of others in the turn of their hand, look on your own soul. William, William, what have you done? What have you become?”

As the rhetoric coach to the Royal Shakespeare Company, author Brandreth has no need to “brush up on his Shakespeare,” and his allusions and turns of phrase prove it. His acquaintance with the Bard’s works shines through in every line of this story.

Readers will delight not only in the plot but will note the many instances of recognizable quotes, as well as how Will’s adventure points to the origins of his plays and poetry.

The plot of The Assassin of Verona is as convoluted as any of Shakespeare’s comedies. Indeed an attempt to relate it may find the teller tongue-tied and the listener more confused. Though this story is much darker than its predecessor and the ending hints at even more dire events to come, it’s nevertheless an enjoyable if violent romp through a period in which merely being from the wrong country or a follower of the wrong religion was tantamount to a death sentence.

Many characters will be recognized as the template for more famous ones from the plays though their natures become infinitely different from the originals.

Aemilia is a model of repressed womanhood. Finding her freedom, she revels in the power she obtains, encouraging others to violent acts, then stepping back and allowing them to be blamed for what follows. One can only feel pity for those so enamored of her they can’t see their destruction lying in wait.

Hemminges is among those so smitten, and his disillusionment is more heartfelt because of his attempts not to fall in love with the girl he’s charged to protect and now sees transformed into someone a danger to both herself and others, a hatchling female tyrant.

William’s metamorphosis is the most subtle and insidious and once uncovered, will make the reader wonder how its discovery will affect his future.

The outcome, hopefully in the next novel, will be breathlessly awaited.