Asperger's Children: The Origins of Autism in Nazi Vienna 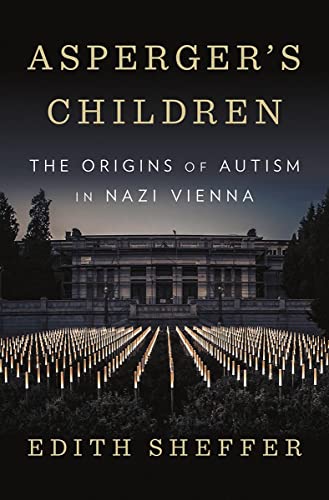 “Studies from the Holocaust have revealed how social death preceded physical death, tracing the creep of generalizations, exclusions and dehumanization of Jews that made mass murder possible. Child euthanasia involved a similar progression. Nazi psychiatry effaced the individuality of thousands of children, pronouncing them irredeemable, removing them from friends and family, and isolating them in nightmarish institutions that paved the way for their biological death. Nazi psychiatry was a strategy of reshaping humanity by denying humanity.  The result for some children was extensive rehabilitation—for others extermination.”

Most of us think of Dr. Hans Asperger as a benevolent and compassionate Austrian psychiatrist whose penetrating analysis of pediatric “psychopathy” led to our present understanding of the autism spectrum of disorders. He has been regarded as a considerate defender of children with disabilities and a leader among Vienna psychiatrists.

In this groundbreaking study of Asperger, author Edith Sheffer’s extensive research exposes another side of Asperger that, until now, has been largely hidden. We learn that Asperger was not following orders or avoiding participation in the Nazi euthanasia program in Vienna. This system was designed to create a pure Aryan gene pool by eliminating children who were unable to work and socialize in a normal manner.

As Jewish psychiatrists and professors in Vienna were forced out of their leadership positions, arrested and sent to Nazi death camps, Asperger benefitted, rising quickly through the ranks to head of the Curative Education Clinic in Vienna. By 1934, Asperger had joined openly pro-Nazi and anti-Semitic professional and social organizations.

Sheffer’s chilling research reveals that Asperger was a willing participant in Nazi euthanasia and a “self-proclaimed eugenicist.” He accepted the task of sorting children as either potentially useful members of the Reich, or hopeless causes suitable only for extermination. Although he never joined the Nazi Party, claiming his Catholic beliefs prevented it, he nonetheless collaborated closely with zealous Nazi physicians in deciding which children would live and which would be murdered.

From this, Asperger unveiled a new diagnosis for autism, one that embraced a previously unheard of scope of behaviors and placed them on a spectrum according to their lack of social connection to the Volk (to the people). Asperger thus recast autism as a tool for the execution of Nazi eugenicist policies. This new diagnosis had dreadful consequences for thousands of innocent children who did not socialize appropriately. They fell into Asperger’s continuum of deadly Nazi ideals that doomed them to death.

Asperger was not an isolated psychiatric researcher, secluded and immune to Nazi influence. Instead, he had multiple points of contact with the Third Reich concerning the creation of a “pure Aryan race.” He worked in a system of mass killing as a conscious participant.

To be sure, Asperger was not a major figure in designing the Nazi euthanasia program. The apparatus that led to the murder of innocent children was arranged by high-ranking Nazi officials. But countless innocent children were murdered in Vienna based upon his definition of “autistic psychopathy.”

Asperger was a proactive psychiatrist, making conscious choices to participate in orders leading to the extermination of selected children. Party officials considered Asperger a reliable part of the euthanasia process. Top psychiatric figures in Vienna held Asperger among their inner circle. He was not submissive. Nor does he appear to have been coerced. His decisions can only be seen as elective.

Asperger sent many innocent children to Spiegelgrund, a children’s hospital in Vienna where thousands of innocent children were subjected to torture and death. These decisions required initiative, determination, and inventiveness. Ultimately, Asperger knew that many, if not most of the children sent from his clinic to Spiegelgrund, would be murdered. He was determinedly involved in the process of eradicating “defective” children to improve the Aryan gene pool.

Edith Sheffer presents a well-researched and thoughtful examination of humanity at its worst. Her research delivers a face and personality to innocent children who were murdered because of their psychological disability. Sheffer compassionately proffers their anguished letters to parents who, in most cases, did not want the child. But the political context of WWII Vienna offered no kindness and no viable treatment. These poor children were abused, tortured, had painful medical experiments performed on them, and then were euthanized as the detritus of the Reich.

Asperger’s Children is a textbook written with unexpected empathy. Sheffer delivers a desperate voice from guiltless children exterminated because of a disability—thrown out by a society that desired perfect Aryan children, able to socialize appropriately.

If nothing else, students must learn from this outstanding book how not to behave. There could never be a more clear view of a society that abandoned morality in favor of mendacious constructs.

The final paragraph of this book was written by the author’s son, who was diagnosed as autistic as a toddler. He describes the anguish of the label. It made him feel humiliated. He was then treated differently by almost everyone. From his perspective we learn how destructive it can be to label people defective. From Asperger’s Children, we learn how dangerous it can be for medical doctors and political leaders to decide which disabled children to murder.