Asking for It: Slut-Shaming, Victim-Blaming, and How We Can Change America’s Rape Culture 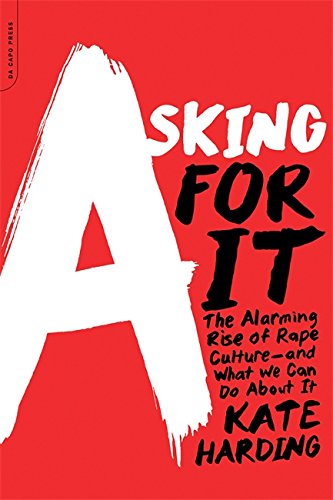 “written accessibly and intelligently, without hyperbole . . . a sincere work of scholarship . . .”

Kate Harding, columnist for Dame Magazine and regular contributor to Salon and Jezebel, is author of the insightful and provocative book Asking for It: Slut-Shaming, Victim-Blaming, and How We Can Change America’s Rape Culture. Using news from current popular culture, as well as her own experiences, Harding has put together a no-holds-barred examination of the social phenomenon of rape culture in which readers are asked to examine the myths that continue to pervade our (American) views of women and their bodies as well as men and their behaviors.

Walking us through an uncomfortable and important topic of sexual assault, Harding evaluates cases that have made the news, what went wrong and what went right from the police reports to the court and public politics involved. The author forces readers to examine their own thought process about rape and the many micro-aggressions that can lead to it—sexism, racism, etc.—and boldly and honestly pronounces that the culture should teach boys not to rape.

Harding is not promoting the idea that men are bad or all men will or can rape, but that without teaching boys and girls from a young age about respect, claiming our autonomous sexual selves, and accepting responsibilities, we set up a culture in which rape can be victim-blamed or ignored.

Asking for It is not without humor either. Though rape is not intrinsically a funny topic, as she discusses in her section about rape jokes, there are some acceptable jokes—those in which victims aren’t blamed or shamed but rather those jokes in which the culture or the perpetrator are lampooned in a show to the audience that this must be changed.

Harding is not afraid of identifying what is bullshit and uses exactly that word, and others, to underscore a particular thought. In Asking for It Ms. Harding hasn’t softened the blows any from previous feminist books about rape culture, but she has changed the direction of the punches so that some of the previous discussions land differently and accurately. The left hooks are entirely unexpected, so much so that just about any reader will have a hard time not recognizing themselves, unless they are willfully ignorant or so entrenched in the culture highlighted here.

Harding does not fail in offering some solutions in what we can do to help change America’s rape culture, which makes this a different book from so many that only point out problems. This book is sure to stir a lot of conversation among those who read it, from feminist scholars to the layperson.

Everyone should read this book no matter their gender identification, sexual orientation, religious, or political beliefs. Feminist and gender scholars will find the book useful, not just as a secondary source but for the plethora of notes and the selected bibliography at the back. The book is written accessibly and intelligently, without hyperbole, and is a sincere work of scholarship no library or bookshelf should be without.