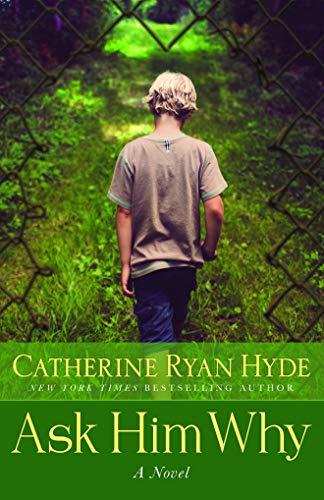 Ask Him Why is a multi-layered narrative with a central theme about the consequences of rushing to judgement without trying to understand the other side by first asking, “Why?”

Imagine you are Joseph Stellkellner and make a shocking decision that affects every member of your family, shattering the family fault line. "How would you feel if you had to wait ten and a half years for someone to ask, why?"

Ruth Stellkellner is 15 and her brother, Aubrey 13 when their older brother, Joseph unexpectedly comes home from his tour in Iraq after only three and a half months. Ruth and Aubrey adore Joseph and are happy he returned unhurt. They are also puzzled and worried about why he’s home so soon.

As abruptly and mysteriously as he showed up, Joseph disappears. Overnight, the phone starts ringing non-stop and reporters camp out on the Stellkellner’s front lawn. Life as the Stellkellners’ know it will never be the same.

Ruth and Aubrey grope to understand why they are being bullied at school and why their family is suddenly ostracized. Typical for their family, no one is talking. Ruthie and Aubrey’s primary source of information is the Internet, newspaper, and the ruthless reporters on the lawn.

Ruthie knows that even in a house where secrets and silence are unspoken rules, silence now is immensely wrong.

Ask Him Why alternates between Ruthie and Aubrey’s tentative and often heartbreaking points of view as each of them struggles to cope with this inconceivable crisis. Ruthie is often reflective and more tolerant of her broken family.

“The thing I’ll always remember best about that time is not how quickly our family fell apart. The memorable bit was when I first looked back at how we’d convinced ourselves we’d ever been together in the first place.”

Younger Aubrey is more brooding and angry. They try, with their limited emotional resources, to support each other.

It’s hard to conceive how these two sensitive children came from their self-centered, neglectful parents. Mother Janet is the antithesis of nurturing and is often on the verge of hysteria. It’s hard to find sympathy for their father Brad with his live-beyond-your-means-and-keep-up-appearances unavailable demeanor. Both parents are so self-absorbed with how the family tragedy affects them that they seem impervious to how Ruthie, Aubrey, and Joseph’s world has broken apart.

Fortunately, there are a cast of supportive adults who help the children. Aunt Sheila provides a refuge for Ruth and Aubrey to escape to over the summer. Aubrey’s therapist Luanne is a lifeline for him.

And then there is Hamish MacCallum, a Scottish emigrant who lives near a cliff on the coast and has a mysterious connection to Joseph. “Hammy” is an almost too good character with mystifying insight and a nearly magical ability to save people.

The writing in Ask Him Why flows with finely wrought sensitivity that occasionally dips into sentimental. The ending is satisfying and redeeming, in spite of feeling a bit like a fairy tale.

Ultimately Ask Him Why is a powerful story about the destructiveness of judgement, broken families, and silence, and the power of love and human kindness to heal. And as Joseph says, it’s about learning to “never assume you’ll have a million more chances.”