Asia's Reckoning: China, Japan, and the Fate of U.S. Power in the Pacific Century 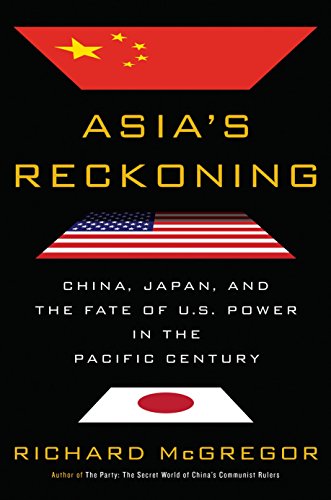 “essential primer for anyone seeking to understand the complicated brew of history, politics, and prejudices that make this area of the globe one of the most likely flashpoints of the 21st century . . .”

In spite of the recent crisis with North Korea, the critical relationship for Asian peace and stability in the 21st century will be the trilateral balance between China, Japan, and the United States. In spite of the economic interdependence of these nations, their domestic politics and foreign policies often clash with their trade interests, and the rise of China as both an economic and military power now threatens to upend the entire East Asia security structure.

As this timely book explains, these interactions are not only driven by economic and security interests, but the complicated domestic political structure of each country and the seemingly unsurmountable burden of history.

The author navigates through the ebb and flow of relations between these countries, starting right after World War II when China went from wartime ally to Communist adversary and Japan went for wartime foe to bulwark against global Communism.

Nixon’s opening to China in the early 1970s, the rise of Deng Xiaoping and the opening of China’s economy, America’s tense trade stance with Japan in the 1970s and 1980s, and the shifting allegiances caused by the fall of the Soviet Union are all placed in context to show how this triangular relationship has evolved as each country has attempted to achieve their own policy goals in the swiftly changing East Asian region, likely to be the global economic powerhouse of the 21st century.

One aspect of this complicated relationship, what the author terms a battle for history, may surprise many readers. World War II never ended in Asia in the same manner it did in Europe, where Germany accepted great culpability for the atrocities committed by the Nazis. Many Japanese in the post-war era, and their heirs in the Japanese government, barely acknowledge Japanese atrocities during the war, and this controversial stance continues to be used by Chinese politicians to both berate Japan diplomatically and whip up nationalistic fervor among their own citizens.

This battle over history continues to this day as each country’s leadership exploits lingering suspicions and latent hatred of the other country, making any future crisis management effort more difficult to manage.

The continuing dispute over the Senkaku Islands, called the Diaoyu Islands by China, located in the East China Sea is the most critical geographic flashpoint between the two countries. The author provides a comprehensive scene-setting history for this flashpoint piece of geography, and shows how both sides use the dispute for internal political purposes and to score geopolitical points.

The danger, as the author describes, is that the tight leash both sides try to keep on their internal nationalistic rhetoric could easily escalate out of control, precipitating a crisis neither side wants, but also one that neither side could easily deescalate.

The book ends on a somewhat grim note, noting that this dispute is not likely to go away, and as China becomes militarily more capable and assertive, the chances for miscalculation become more real, and the chance for inadvertent conflict more possible.

This book is an essential primer for anyone seeking to understand the complicated brew of history, politics, and prejudices that make this area of the globe one of the most likely flashpoints of the 21st century.