Asians Wear Clothes on the Internet: Race, Gender, and the Work of Personal Style Blogging 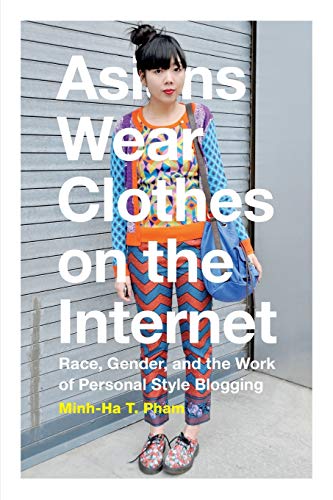 Minh-ha Pham has taken a somewhat innocuous topic and tried to make it a Major Topic. The problem here is that the subject matter is banal and Pham is trying to turn the proverbial anthill into a mountain.

Asians Wear Clothes on the Internet is an overly scholarly and excessively over intellectualized thesis on a somewhat relevant topic—albeit with a limited audience—that will get even smaller once an attempt is made to read this book.

“Asian superbloggers are immaterial or informational laborers, yet their gendered racial bodies are of particular importance to their work in this historical period of global fashion capitalism.”

Huh? Say what? Do you suppose this example of the tenor of the book engenders even interesting reading? Maybe this will clarify it for you:

“Asians Wear Clothes on the Internet demonstrates the complementarity of fashion’s informational and industrial labor systems without conflating the two.”

Feeling stupid yet? This is a book that needs to have a warning label on its cover: ABOVE AVERAGE IQ REQUIRED—as well as a well-honed aptitude for boredom and ability to suffer scads of mind numbing statistics. This was a tedious and onerous read that left me feeling rather intellectually challenged if not just plain stupid.

Pham is proof positive that the Internet allows for endless analysis and gives all of us the opportunity to justify a point or a way of thinking. Let’s call a spade a spade here and ask who actually cares to point out the “blogger selfie pose” or propose that only Asians, according to Pham, are the greatest influences of so called Internet fashion leaders and trendsetters.

The simple theory that hype doesn’t translate to selling clothes can be applied to here as followers of these so called “ superbloggers” do not equal impact on fashion. Pham cites examples of how a photo might spike the sales of a pair of jeans or an item at Forever 21, but what she does not offer is the percentages or ratios of that situation, let alone the age group of these trendoids. So much of today’s so called fashion influence is supposedly propelled by a photo rather than any substance or facts as so many of these followers have no desire other than to be “in.” Oddly, the book is already out of date as many of these so-called fashion movers and shakers have moved on.

The bottom line here is that if you are looking for a book that will overanalyze an obscure topic with an almost reverse racist point of view than this is a book for you. This is not a book to be enjoyed on a visual level as there is no question that Pham takes current fashion and turns it into the most cerebral of pursuits via a marginal topic, no matter the bells and whistles and tedious research.