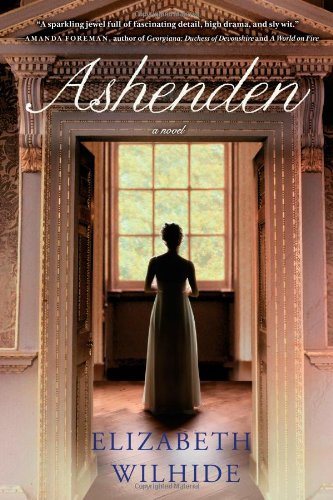 “Who knows what comes next, what lies around the corner? The house can’t tell you, nor is the future in its power to determine. But it knows what it wants. What it wants is a beating heart.”

The heart of Elizabeth Wilhide’s Ashenden is captured by this opening paragraph of Chapter 16. For this is the story of a house, a home, an estate—choose whatever word you wish—the main character is “Ashenden.”

Ms. Wilhide opens the story in 2010 when Charlie Minton and his sister Ros inherit a house in the English countryside, and are faced with the dilemma of whether to sell it or keep it in the family. By this time, the house, its surrounding buildings, and acreage badly need attention—expensive attention. As they ponder their own fate and that of Ashenden, they consider the important history of the house.

The reader is introduced to James Wood, the man responsible for bringing the house to life in 1775 and the first tragedy that the building encounters with the death of Wood’s young apprentice. Ms. Wilhide describes with precision the stone used in the construction and the backbreaking work required to move and shape that stone. She details the daily processes that Wood and his team must go through to design and build an overpowering house, one with a soul. The reader senses that the stone is a living, breathing ingredient to the composition of the house.

Ms. Wilhide skillfully moves from the starkness of the outside of the house to the interior issues of completion. After 20 years, she brings Wood back to the house as an elderly man revisiting the success of his youth. Though disappointed in the interior’s incompleteness, he revisits his past through his memories of the initial work and the pain of losing a young friend.

The story continues to wrap the house around its various owners and their successes or failures—these same successes and failures that account for the appearance and structure of the house as it ages. Through four decades of use and misuse, the story moves from the deteriorating interior to the decoration, specifically a portrait and the relationship between the artist and the wife of Ashenden’s current owner. It is a relationship that is destined to failure, and a relationship that will bring down the staff at Ashenden as well.

The story moves a scant five years past the disastrous relationship and brings life back to the estate as a new owner pours time and money and energy into refitting the estate and returning it to a destiny previously left behind. The house is rejuvenated with the sounds of children’s voices, and a new enterprise rises through the efforts of a family member: a school is established on the grounds, and as the house reclaims its destiny, it enjoys growth outside of its immediate place and time.

Each subsequent chapter moves through various owners, and although some chapters spend more time on the character of the owners, the house always sits in the background, breathing life into the people it accommodates.

Each new chapter considers the era in which the chapter explores: monarchs’ deaths, world wars, and social upheaval. And yet the house, through its various stages of deterioration and rebirth, survives and one might say, even thrives.

Ms. Wilhide’s character development brings life to each personality, and each chapter is tied to the previous and tied to the next through these characters.

Each new character deposits something of his or her own, something that adds dimension to the personality of the house. As Ms. Wilhide brings the reader full circle back to Charlie and Ros and their dilemma, she captures the heart of the story when she writes, “The village had changed a great deal over the years, much more than the house, which was trapped in a time warp by comparison.”

Charlie and Ros come to a decision that completes the story arc as well as the beginning of Ashenden.

Ashenden is a tale that grabs the reader, places him on the newel post, and encourages him to experience the life of a house through its owners, staff, and guests. This story belongs on one’s library shelf.