The Ascent to Godhood (The Tensorate Series) 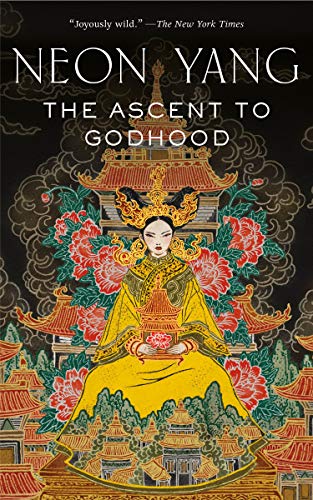 “The Ascent to Godhood is definitively not to be missed.”

In the fourth installment of The Tensorate Series, Yang reveals the romance and descent to madness (evil genius?) of The Protector and her lover, Lady Han.

The story is told entirely from Lady Han’s perspective. It begins with her childhood in the countryside, follows her sale to Madam Wong as an entertainer, her work as a spy, and her life in the Great High Palace with Hekate. The scenes are vivid and visceral, as the narration is done via Lady Han telling a story to a bar patron many years after the events have occurred.

Of particular interest is how Lady Han and Hekate meet repeatedly at parties where Lady Han is entertaining and Hekate is merely a girl to eventually be married off. Their friendship—and romance—bloom organically and give an unexpected depth to what readers already know of the bitter and controlling Protector from earlier books. There’s unexpected heat to the women’s early interactions as well:

“I asked, What are you going to do to me?

And she said, You mean tonight, or for the rest of time?”

The Ascent to Godhood has all the hallmarks of the earlier Tensorate books. Gender assignment is addressed early and without much fanfare:

“You have to understand, out in those areas, we didn’t do gender like they did in the capital.”

“The Protector’s youngest had just had his gender confirmed . . .”

And time is spent addressing the importance of children and family:

“Imagine, if you will, two young women laughing in a sun-dappled room while a baby babbles in their arms.”

Although series readers will know the eventual outcome of the relationship from previous books, the rare and sometimes voyeuristic look into the private lives of Lady Han and Hekate still thrills. Hekate is no less power hungry than in later books, but that hunger is tempered by tight familial bonds, and what appears to be deep fondness for Lady Han.

The eventual betrayal that sends Hekate down a more brutal path and the fallout with Lady Han commands a delicate reading, as so much nuance and emotion is conveyed in very few words. The aftermath is no less riveting for already knowing the outcome, and the end of the book is satisfying despite the broken love and broken promises.

Those who enjoyed earlier Tensorate books will not be let down by this most recent installment. Those new to the Tensorate series will easily become immersed in the world and engaged with the vivid characters and quick moving plot. The Ascent to Godhood is definitively not to be missed.