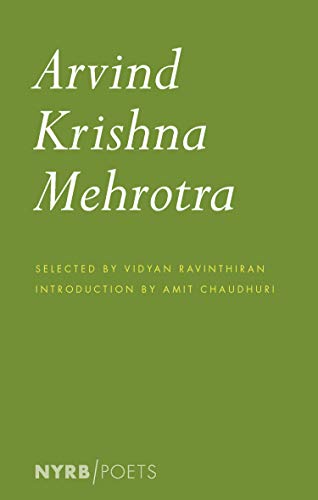 “Mehrotra is a major poet expanding the possibilities of poetry in English.”

Early in this generous selection of work by one of the leading contemporary poets writing in English in India, Mehrotra’s poem “Ballad of the Black Feringhee” provides an interpretative frame for much of what will come. The poem has an epigraph from American poet Carl Rakosi, “I would rather sing folk songs against injustice/and sound like ash cans in the early morning/or bark like a wolf/from the open doorway of a red-hot freight/than sit like Chopin on my exquisite ass.” The poem, which is dated 1974, ends

India their bullets won’t settle on me like flies

India there’s no need to hide your large teeth

India what a big nose you have

India remember the pile of ash on Mandelstam’s left shoulder

Not only is the poem very clearly and self consciously recalling Allen Ginsberg’s “America,” but the references to the Soviet Union bring the poem into an international context. Yet the images that shape most of the lines are resolutely Indian.

Later in the collection, many of the poems become much shorter. With shorter lines and distinct images, the poems work like some poems by William Carlos Williams or Gary Snyder, in spite or occurring in an Indian landscape and atmosphere.

Amit Chaudhuri, in a long introduction that does an excellent job placing Mehrotra in the line of Indian poets writing in English and in explaining the cultural position of this poetry, describes these poems as “succinct summations of nothing more than being present somewhere at a certain time.”

Here’s a short poem in its entirety. It is entitled “Munnar,” an area popular with tourists in the southern state of Kerala:

with the scent of

its last night with,

The poem is built on the belief that not only is that kind of detailed perception enough, it is also important. The image is clear, even if many readers from the dominant English-speaking countries might have to imagine “the scent of the vanilla-leaf.”

Although most of these poems turn on images or incidents from the Indian landscape, much of Mehrotra’s work is a critique of Indian politics or cultural prejudices.

For instance, in the translations at the end of the book, the editor has included a generous selection of this poet’s translations from the 15th century mystical poet Kabir, who wrote his songs in a kind of street Hindi that was recognized by all of his contemporaries. Although Kabir was born in the holiest of Indian cities, Varanasi, he completely rejected the orthodoxies of both Hinduism and Islam. That seems particularly relevant given the current state of Indian politics.

Some versions of Kabir by Robert Bly, widely available in the United States in the 1970s, were constructed out of earlier translations and cribs to the Hindi originals. Bly was criticized for the wild anachronisms he put in the poems in an effort to make them sound contemporary. Mehrotra, who has Hindi as one of his languages, is willing to go even farther at drawing in references that connect the 15th century poet to our world.

His translations have epigraphs from Horace and Leadbelly, as well as to Indian spiritual figures that Kabir may or may not have known. Here’s one untitled song:

“To tonsured monks and dreadlocked Rastas,

To idol worshippers and idol smashers,

To fasting Jains and feasting Shaivites,

To Vedic pundits and Faber poets,

The weaver Kabir sends one message:

The noose of death hangs over all.

Only Rama’s name can save you.

Those Rastas and Faber poets might seem like concessions to American and British readers, but they are actually simply indicators of the wide range of reference available to contemporary Indian writers working in English. It would seem more forced and much odder, although not impossible, for an American or English poet to write of Shaivites and pundits who are anything other than television commentators.

Mehrotra is a major poet expanding the possibilities of poetry in English. New York Review Books has done a necessary job providing this excellent introduction.