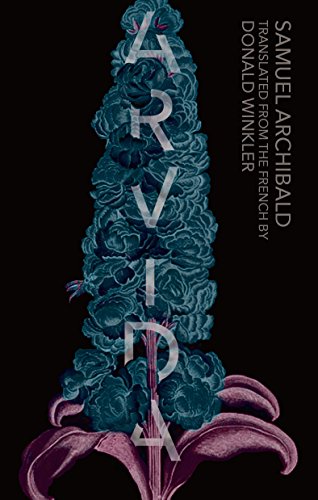 These short stories operate like a dark mirror reflecting the vicious barbarism hidden beneath the staid surface of quotidian small town life. Despite its exotic name, Arvida began as a project of magnate Arthur Vining Davis. The town became famous during the Second World War as a manufacturing hub for aluminum fuselages.

Ably translated by Donald Winkler, the short stories possess a variety of tones. Archibald plumbs a wild and violent underbelly of human existence in the vast expanse of Quebec. (To put size and wildness in perspective, Quebec is twice the size of Texas and the largest Canadian province.)

In the story “Cryptozoology,” a contemporary lumberjack on vacation in the Canadian wilderness thinks he is being stalked by a giant wolf-like beast. Unlike a traditional horror story, the beast is not the central antagonist, but the incomprehensible scale and ferocity of the landscape and climate. The landscape takes on a Lovecraftian quality, a place beyond human reason.

The previous story, “Antigonish,” is also a scary story, albeit one focusing on the uncanny and laden with existential dread. The story relates how an unnamed protagonist and his passenger, Menaud, take a road trip to go explore historical sights in Canada's mining history. The two have a conversation reminiscent of Samuel Beckett's tramps:

“No one ever comes here.”

The story dwells on the notion that some places in Quebec's far north are without a name because even the Native Americans didn't stop and stay at these lakes. Mankind becomes small and meaningless when thrust against the realization it has not settled and named everything on the Earth's surface. It is this existential dread complementing the story's other supernatural elements that gives it a strange power.

Not all the stories fit into the comfy genre box. “Jigai” is set in Shogun-era Japan, is written in exquisite prose, detailing a body horror fable. Comprised of equal parts erotica and court intrigue, the story recounts a couple intoxicated by extreme body manipulation, cutting, tattooing, and piercing. The severe formalistic prose strains against horrific descriptions.

Other stories in the collection could be classified as haunted house tales or family histories. Insatiable desires and lunatic passions collide with small town proprieties. “A Mirror in the Mirror” is about Gemma who “belonged to one of the founding families of the town.”  “She was not ashamed of embodying decadence and extinction, she accepted it philosophically.”

Eventually she marries Michel, a man of the theater. While he is away writing unsuccessful plays, she slowly fades away. Whether her withering away can be traced to a medical condition or an otherworldly malady is never explained. Certain passages allude to anorexia, until Michel returns and doesn't find her. Then Michel becomes a shut-in. Archibald succeeds in creating compelling narratives by nurturing these ambiguities and letting them play out organically.

The story manages to combine the small town oddball against gossipy townsfolk like William Faulkner's “A Rose For Emily,” with the French literary tradition of Decadence and Symbolism. The story has the allure of an incomplete allegory. The incompleteness doesn't negate the story's power, but somehow elevates it beyond the form and expectations of horror literature.

In the field of Canadian literature, the names Margaret Atwood, Robertson Davies, and L. M. Montgomery trace back to Canada's English tradition. Samuel Archibald comes from a different genealogy, the French-speaking Québécois standing apart yet whose history can be traced back to the voyageurs, the Métis, and the vast untamed wilderness.