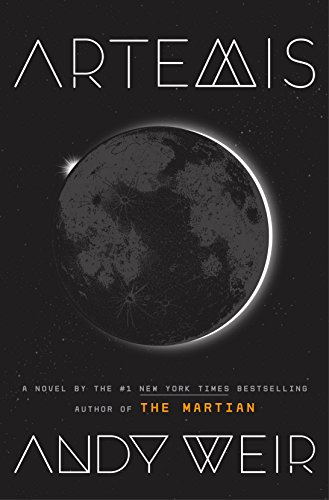 Destined to become a blockbuster movie.

Imagine the allure of having a moonbase for a tourist destination. For the wealthy there will be restaurants, casinos, alcohol, and prostitutes. Of course there’s a dark underbelly, guest workers have at best flavored algae for food.

Artemis is that moonbase. Comprised of pressurized domed buildings, Artemis also goes deep underground. A more distant base that can be reached by a pressurized train holds the Apollo 11 visitor center.

Theirs is no military presence on the Moon, and no police. There is private security, but its agents are not allowed to carry guns. On Artemis It is a crime to be homeless and all crimes are punishable by exile to Earth. The guest workers arrive from third-world countries, cater to tourists and run the repair shops.

The premise is set not too far into the future (perhaps 50 years or so) and as such not all that technologically advanced. Severe spinal injuries are still permanent. There are no vaccines against STDs. Brains can’t be uploaded to computers. The one improvement author Andy Weir calls out is the grocery scanner that scans multiple objects at the same time. There are technological steps backward as well. There is no high speed Internet connection between the Earth and the Moon, and Artemis’ servers cannot be depended on.

There is however one significant advance: robotic mining and manufacturing. Distant from Artemis are domes that support aluminum ore mining. The byproducts of manufacturing aluminum include oxygen for breathing, and glass made from silicon. Artemis’ atmosphere is 100% oxygen (a science fact that is ignored is 100% oxygen is a poison that can lead to blindness). Because of the pure oxygen atmosphere, no open flames are allowed on Artemis, and that includes smoking. Despite the constant danger of fire in a contained space, there are no professional fire fighters on Artemis, only trained volunteers.

The hero of Artemis is a teenager nicknamed Jazz (for Jasmine) who considers Artemis her home. Jazz works as a freelance porter (who for a fee she deliver to tourists contraband such as cigars). Jazz is hoping to increase her wages by becoming an outer space tour guide. But first she has to pass the tour guide test (which comes close to going horribly wrong). Jazz’s father is a welder, originally from Saudi Arabia, and Jazz’s mother died when Jazz was a baby. Readers are filled into Jazz’ backstory through letters Jazz writes to her smuggling co-conspirator on Earth.

However, for those into well-written science fiction, there will be literary disappointment. Artemis’ characters are cardboard, the dialogue (when there is dialogue) is clichéd and wooden. The plot a reworking of American Westerns bearing homage to High Noon and The Good, The Bad, and The Ugly. The MacGuffin, the contrivance that sets the action into motion, is a piece of high-tech gear that can only be manufactured on the moon.

Don’t read the book, see the movie. And for adults considering purchasing Artemis for young science fiction for Andy Weir fans, Artemis’ language and situations fit within a PG-13 rating.