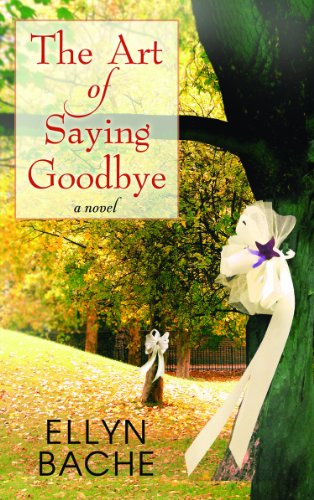 “In her new book, The Art of Saying Goodbye, Ellyn Bache focuses on friendships, family, and life in a close-knit suburb in a very real way. . . . Wisteria Lane this is not.”

Readers often assume that books about women and their friendships fall into two categories: chick-lit or strong women-who-need-a-good-man type of book.

But you know what they say about assuming.

In her new book, The Art of Saying Goodbye, Ellyn Bache focuses on friendships, family, and life in a close-knit suburb in a very real way.

Wisteria Lane this is not.

The book opens as four women who live near each other and who have been friends for years, find their lives disoriented and disrupted as they tie white ribbons to trees in front of their homes as a gesture of support and affection for a long-time neighbor Paisley, who has cancer.

“The situation is, in the most literal sense, unthinkable. They are in shock. At the beginning of this unknowable journey, they sense—especially Julianne, Andrea, Ginger, and Iona—that this is happening not just to Paisley, but to them all.”

During the tense three months that follow, the women come to terms with their friend who is the perfectly beautiful and the perfectly perfect one of the bunch. (But of course she is not.) It makes the others examine their lives and, most of all, their reasons for being friends.

The women will seem familiar to the reader. These gals are bossy and insecure. Angry and regretful. Funny and selfless. They are real women with real lives that are far from being flawless, but it’s their friendships that make it all bearable. When they lose someone, they wonder how they can go on. (No need for a spoiler alert; the title says it all.)

“They sit there for a while, not talking, because Paisley is dying. It’s out in the open now, so what else is there to say? They have been friends for so long. All friendships end one way or the other. Andrea knows people usually feel superior when someone they know is dying. You’re finished, but look at me, I’m going strong. Andrea doesn’t feel that way at all. She doesn’t want Paisley to go without her. She doesn’t want Paisley to leave her behind.”

But don’t be afraid—this isn’t Beaches. You won’t be hysterically sobbing on the subway, but you will feel the pain of these women who learn how to celebrate the joys and triumphs of girlfriendships.
Grief, friendship, marriage, love and uncertainty—it’s all here—portrayed quietly and convincingly, without being over done.