The Art of Noticing: 131 Ways to Spark Creativity, Find Inspiration, and Discover Joy in the Everyday 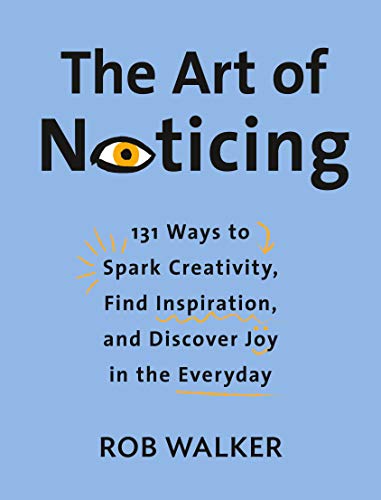 “Darwin worked only ‘a couple of hours a day and spent a lot of time taking long walks.’ Just imagine yourself doing the same. ‘How fun would that be?’”

Rob Walker is an advice columnist and journalist who covers art and design. He also teaches at the Products of Design MFA program at Manhattan’s School of Visual Arts. In an “era of white noise,” as the endpapers call it, what can such a credentialed author tell us in this small format book? The answer isn’t “not much” so much as it is whether readers will implement any of his 131 exercises that seem opaque.

Walker urges readers to cultivate the ability “to attend to what others overlook . . . to get beyond distractions and attend to the world.” He admits that paying attention isn’t easy, but implies that noticing is a joy, pointing out that Darwin worked only “a couple of hours a day and spent a lot of time taking long walks.” Just imagine yourself doing the same. “How fun would that be?”

An annoying tic is quoting people liberally without identifying who they are. Looking a dozen of them up, one discovers they are academics, cultural critics, curators, and luminaries of the design world. This is an entre nous insider’s book, then. But doesn’t this insult readers who are not equally in the know as the author, who innocently picked up the book to learn how to “spark creativity” in their own lives?

Count with the numbers you find.

Change is to could be.

Sketch a room you just left.

Make an inventory of things you didn’t buy.

Directives are issued mostly without directions:

Absent wearing distinctive hats for each role, how does one go about this? “Listen selectively” sounds like good advice, but instructions for how to do so are missing. Similarly, “Find something you weren’t looking for” could be intriguing. But what does the sentence even mean?

The most successful part of the book is its last section, “Being Alone.” Suggestions include “Describe the night sky,” and “Be alone in public.” The latter taps into our fear of being judged, but “it is not a penalty to spend time alone.” It is, rather, a chance to live “totally free of anyone else’s expectations.”

Without guiding examples or going into more depth, appeals such as “imbue your world with god spirits” may strike readers as meaningless. Unless, perhaps, you are among the rarified group already in the know.