Art Is Life: Icons and Iconoclasts, Visionaries and Vigilantes, and Flashes of Hope in the Night 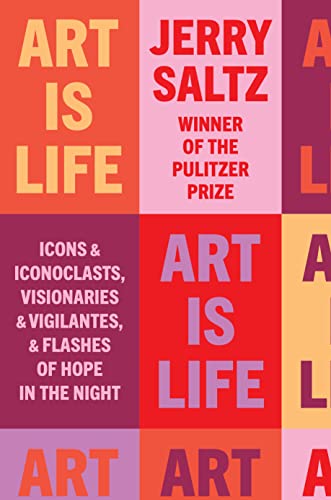 “Perhaps more than a collection of critical essays, Art is Life is a love story. . . . these pieces pop and sizzle with an unabashed wonder and veneration for the ways in which art has shaped his life.”

For all the die-hard Jerry Saltz fans out there, there’s finally a single volume containing the majority of his musings over the past 23 years. And why shouldn’t Jerry Saltz have die-hard fans? He’s a rock star in the New York art scene—running into him at a gallery can be akin to spotting Beyoncé at the grocery store, with everyone trying oh-so-hard to “act normal,” surreptitiously whispering to each other while he casually ponders a nearby painting.

Moreso than any other cultural critic, he’s harnessed the power of social media in an attempt to tear down the barriers within the art world, inviting any and all to weigh in on his latest discovery. And while some of his discoveries make one question his taste—his enthusiasm for the Instagram artist Alphachanneling in the essay “Is There Great Art on Instagram?” seems a bit misplaced for work that looks like what would happen if Lisa Frank dabbled at erotic line drawings—his effort to democratize the conversations we have about art is a noble and just cause. Who benefits from criticism if the only audience that can decipher it has to hold a PhD?

Yet, while every essay in this book is notably readable, the lack of corresponding images may make even the most seasoned art nerd feel a bit adrift. One may be able to bring to mind Louise Bourgeois’s phallic Fillette, but without the help of Google something like Amar Kanwar’s A Season Outside is a bit harder to muster. These moments of inside baseball art talk will vary for everyone, but it’s nothing that access to a smartphone can’t fix.

Saltz is also a master of the witty quip (something that certainly lends to his popularity on Twitter). In one particularly violent moment of verbal evisceration, he notes that Takashi Murakami creates “paintings that have the visual oomph of screensavers.” The fact that so many of them sell for over a million dollars only speaks to the vapid taste of contemporary blue-chip collectors who see art as a means of a dick-measuring contest. Museum curators are also on the chopping block, as in “Great Artists Steal: The Pictures Generation,” he calls an exhibition at the Met “less a critical survey of a highly influential aesthetic than a feel-good class reunion.” Burn.

His loathing for the overblown financial side of the art world is palpable and something he criticizes heroically, lambasting “megacollectors” who build identical big-ticket hoardings of asset-based art and the galleries, museums, and institutions that help perpetuate it. He goes so far as to call for “a pox upon the auction houses, those shrines to the disconnect between the inner life of art and the outer life of commerce.” Yet there is no greater moment of schadenfreude than when he reminds the reader how he was one of the few brave enough to call out Christie’s much-publicized sale of Salvator Mundi, the “last Leonardo” now very much considered to be not by the great Renaissance master.

He also pulls no punches with the museums who help maintain the sanctity of the predominantly-white, predominantly-male artists favored by the capitalist juggernaut that is the contemporary art world. And while his insistence on being someone who lauds women artists and artists of color can be a bit self-congratulatory, nary smug, he’s not wrong. Few mainstream arts writers have his track record for focusing so much of their time on those outside of the canon, inviting them into the fold.

That said, he isn’t without favoritism. He frequently mentions his friend Carroll Dunham, father of Saltz’s internationally famous godchild, Lena, inserting his work as a touchstone alongside artists of bigger talent. We all throw a bone to our buddies, but Dunham would be punching above his weight class if he ever made similar assumptions about his own work.

Saltz makes a point of stating repeatedly that he is not an art historian, that he is a failed artist; yet his knowledge of art history produces some of the strongest essays in the book. He may quote Clement Greenberg more readily than an overenthusiastic grad student, but his art historical analysis tends to be spot on. His breakdown of Modernism, one of the stickiest and trickiest genres, should be taught in schools as it’s long been the golden calf upon which students are conditioned to lay praise, when it has ultimately evolved into, as he puts it, “aesthetic apartheid.”

The best writing happens when Saltz reaches levels of excitement on par with Bernini’s The Ecstasy of St. Teresa. In these moments, we experience his awe, his rapture to be in the presence of something that transcends the human experience. Writing in “Buona Serra” about a Richard Serra show at MoMA, he “could feel the vibrations from the exhibition temporarily transforming the world into oscillating wave patterns and semisolid biologic forms and entities;” in “The Most Powerful Artwork I Have Ever Seen,” he expounds on the experience he and his wife had visiting the Niaux cave where “stunned, ecstatic, I felt like I was on the verge of blacking out”—I’ll have what he’s having. We challenge anyone to read “Georgia O’Keeffe: Out of the Erotic Ghetto” and not have a greater appreciation for her. “The Great, Inscrutable Robert Gober” may be the best writing in the book, presenting a solid and beautiful study of the artist’s work and why he is “one of the best American artists of the last thirty years.”

Perhaps more than a collection of critical essays, Art is Life is a love story. Bookended by deeply personal writing about his mother’s suicide not long after she took him to his first art museum and his devoted, long-term marriage to Roberta Smith with whom he shares an intellectual passion for this profession, these pieces pop and sizzle with an unabashed wonder and veneration for the ways in which art has shaped his life. He’s made a space for you at that table.

Angelina Lippert is a museum curator and graphic design historian. She is the Chief Curator and Director of Content for Poster House in New York City. She has lectured at myriad venues, and is currently working on a book on the history of advertising New York City.