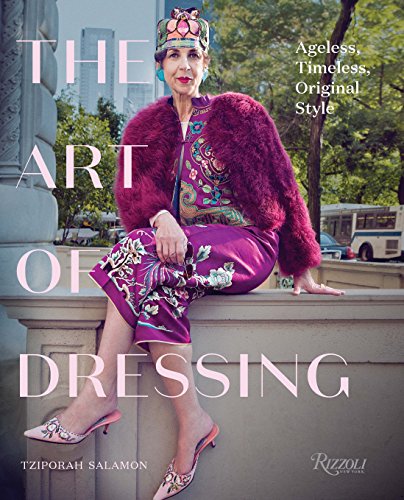 The first thing that the reader will encounter is that there is a bit of a disconnect between the title and text. Salamon, who has been a visual presence in NYC for decades, starts out by offering her take on style. Style is quite individual and unquestionably she has devoted herself to her own personal presentation as well as perfecting her style.

The real conundrum begins when Salamon appoints herself an arbiter of style, clearly hoping and trying to make a case for the premise that style can be learned and is not inborn. Furthering that notion is that the author states that women over 50 are the only qualified ones to own their style as their lives have afforded them the opportunity and time to create and mold that style. HUH? The patent absurdity of that concept threw this reader for a loop especially when women such as Isabella Blow, Daphne Guinness, Nan Kempner, and Jackie Kennedy created individual styles for themselves long before reaching this age.

Age and style are not inextricably linked by any stretch of the imagination. Pursuant to her theory of style and how it happens is that this reviewer and fashionphile would whole heartedly disagree and say that style, as a rule, is innate to a human being and not learned by reading or taking courses. Yes it can be molded and refined with age, but Salamon confuses genuine style with one’s public image or persona.

“Style is an expression of individualism mixed with charisma. Fashion is something that comes after style.”
—John Fairchild

The most logical expectation of the book is that it might have been a continuation or sequel to Ari Seth Cohen’s Advanced Style, but that expectation is quickly quashed the more you read. The reality is that Salamon has espoused and expounded not only on the trajectory of her image and style but on how one goes about acquiring and building a style or image. Some might find her words illuminating or helpful and the more seasoned reader might find it odd that she has taken it upon herself to cast herself as arbiter and tutor on all matters of style.

As a whole, this valiant efforts comes across as rather preachy, sort of self-congratulatory, and lost about what exactly the topic at hand was supposed to be. Salamon might have been best served to devote the book entirely to her style, her image, and her Art of Dressing as she has a story to tell and many in the sphere of fashion might be interested to know the details.