The Art and Making of The Flash 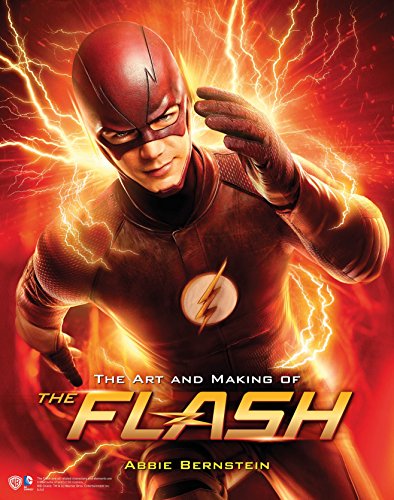 The appeal of The Flash TV show on the CW network transcends age groups in a way that few television shows ever really do any more. A wild mixture of adventure, romance, and special effects coupled with a fractured attempt at a regular family life, The Flash grew quickly to become a fan and media favorite.

Sci-fi fans love the show’s take on time travel as well as the neverending plots and twists. Little kids are terrified by the giant animal that is Gorilla Grodd. Some fans are attracted by the revolving romantic angles. A very vocal sea of hardcore comic book geeks praise the devotion and respect paid to the original source material, often hurriedly posting on message boards when they spot the recreation of a favorite comic panel or a development in the show which may have first originated in the comic book.

Abbie Bernstein’s new title, The Art and Making of The Flash, a terrific overview of what it takes to bring The Flash TV Show on the CW Network, reveals the real secret to what makes the show appeal to fans across the board.

It is team work.

A great comic book, and The Flash is among the greatest of all time, may only need a writer, an artist, and an editor to come to life before anyone can read it. But a great TV show may have originated in the mind of a couple of people, but it takes an absolute truckload of people to make that idea come alive when the director calls for action.

The book features plenty of quotes and pictures from the writers and actors, but in taking the reader so far backstage, Bernstein is just as likely to quote Production Designer Tyler Harron, Makeup Designer Tina Teoli or Costume Designer Maya Mani.

This is a full-color, information-packed celebration of how much incredible work that show’s production, tech, design, and creative staff achieve over the course of 23 weekly episodes in a production year.

From the opening introduction, written by one of the creators of the show, Greg Berlanti, until the last page, the focus never leaves one simple, concrete idea. That the success, beauty, and fun of making The Flash is the product of a lot of hard work from a lot of talented people.

With hundreds of photos and almost as much art, the book highlights the costumes, sets, and designs that have gone into making the show looks so stylized and individualistic. While not an episode guide in the strictest sense, it works chronologically as the story and the success of the show builds up speed.

An early production still takes us to the top of a high rise as we see Barry running as The Flash below. The soft focus of the lights in the building as we look down, the angle of the view and the straight lines of the buildings themselves as we look past them toward the glow of the light from the Flash running below—all create the eerie feeling of possibly been taken from a Superman cartoon created by the Fleischer Studios in the early forties.

The monorail concept designs for the world of Earth-Two look as if they could have come from the 1939 New York World’s Fair. The artwork reveals the deep respect that the creative team on the show has for the art that Carmine Infantino originally drew for the Silver Age comic book version. The work also touches stylistically on ideas created by Fritz Lange for his 1927 film Metropolis, which is one of the ideas that influenced Infantino.

Another piece of production art highlights the contrast between the sleek architectural lines of the modern S.T.A.R. Labs building against the appearance of an equally sleek but clearly dated and oversized police car sitting out front.

As an overview of the show, the book walks a fine line between catering to the novice and possibly alienating the hardcore fan with senseless trivia and observations. Bernstein gets out of the way of her subject, letting cast and crew talk for themselves while backing up their work with the exact picture needed at the exact moment.

A near-perfect combination of science-fiction and wish fulfillment, the comic book world of superheroes, vigilantes, meta-humans, mutants, and misfits has transcended its origins in the world of seedy pulp magazines to become the mythology of modern America.

Where Thomas Bullfinch once wrote of how Mercury, Zeus, and Hercules, and the Minotaur thrilled citizens of ancient Rome and Athens, the show’s creators Berlanti, Andrew Kreisberg, and Geoff Johns, now thrill modern audiences with The Flash, Caitlin Snow, and Firestorm.

A metal sign, a plaque of sorts, was created to sit on the outside of the Central City Police Department. It perfectly captures the link between the traditions of verbal storytelling and modern TV production.

Across the bottom of the plaque, in their full toga-clad glory, sit Zeus, Athena, Mercury, and several other gods from the world that Bullfinch documented so well 150 years ago. At the bottom are the ideals of “Truth, Liberty (and) Justice.” It meant the same thing in Athens and Rome and it means the same thing in Central City.

There is no richer vein of American-based mythology in the world today than what Julius Schwartz, Stan Lee, Jack Kirby, Ramona Fradon, and a thousand other men and women have built in the world of comic books over the last 75 years. As Bernstein reminds us in page after page of her new book The Art and Making of The Flash, Berlanti and his team have done the work created by those who preceded them proud.