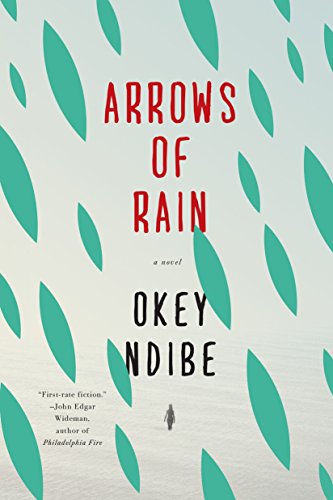 “a political thriller, complete with a vicious dictator, a bloody coup, the ascendance of an even more murderous dictator, and resulting grave danger to a main character.”

“The young woman lay on the sands, her mouth frozen into a smile, as if nothing in the world surpassed the sweetness of death. Her face was hardy, but death made her seem older and sadder than twenty. Her eyes bulged glassy like a grasshopper’s. Her bright blue shirt and flamingo skirt hung loose about her, rent. A large copper earring dangled from her left ear . . .”

That gruesome yet striking image of a murdered woman immediately draws the reader into Arrows of Rain, the first novel by Nigerian Okey Ndibe. And the powerful imagery introduces an equally powerful story or, more accurately, a number of compelling tales, blending the personal and the political in the fictional Madia, an African nation (partly modeled on Nigeria) plagued by corruption and oppression—both the legacy of a colonial past.

A young journalist, Femi Adero, narrates Part 1, titled “Mists.” On New Year’s Day of 1988, Adero comes upon the scene of a murder on a beach. Ndibe has Adero tell Part 1 in clear and crisp prose, crafting a fast-paced and suspenseful narrative with strong imagery, metaphor, characterization, and dialogue that all bring the story brilliantly alive.

For example, near the murder scene, a lifeguard called Lanky excitedly and nervously tells of discovering the dying woman—first to onlookers, then to police; and, as the lifeguard speaks, a “madman” called Bukuru appears.

“He stood, unmoved by the eyes that rained on him. His hair was knotted into long gritty locks that dropped like a Rastafarian’s to the small of his back. His eyes were deep set, the color of an old lake . . .”

“He was one of the monsters of my childhood dreams . . .”

“Bukuru took in the scene with the passivity of a statue, as if his mind were focused on more lasting things: the rays of the sun, the wind’s song, the waves which continued to rise and fall, making eternal love to the shore.”

Bukuru thus enters the scene first with silence, then wisdom, humor, and, eventually, scandalous accusations against the nation’s leadership for this murder and many more. Bukuru is arrested—unjustly—for the murder. A trial ensues, and Adero becomes the only journalist who defies government orders and writes of the “madman’s” accusations.

In Part 2, “Memories,” Bukuru narrates his own story, which he has written for Adero. Who is Bukuru? How did he become a “madman” roaming the beach? Why is he certain that the murders can be blamed on Madia’s leaders? All this is best left for the reader to discover.

Though Arrows of Rain begins with a murder, it is not a murder mystery. It is a political thriller, complete with a vicious dictator, a bloody coup, the ascendance of an even more murderous dictator, and resulting grave danger to a main character.

Yet it is a thriller with personal tales folded within—an outside frame story (Adero’s), and a longer inner story (Bukuru’s), with yet another story inside that (of a prostitute named Iyese), and even more stories within those. The reader may sometimes feel that the main story wanders or may lose track of which narrator is speaking or whom a given story is about.

Yet every character’s story is crucial, because each life has been tainted, possibly destroyed, by the legacy of colonialism. That commonality ties the characters together and underscores the anti-colonial and anti-corruption themes.

How did this culture of corruption arise and survive even beyond Madia’s independence? One character, Pa Ata, provides answers. Ata, 83, lived under colonial rule as a school headmaster until being imprisoned for two years for pummeling an arrogant colonial superintendent. Ata wonders, rhetorically, why Madia has such pervasive corruption. Is it “in the nature of our people”? No, he insists, such corruption didn’t exist before the days of British rule.

“In the old days, before the white man came and stood our world on its head, no man who was given something to hold in trust for the community would dare steal from it to serve himself.”

He continues, blaming colonialism for Madia’s past and present woes in an insightful historical analysis.

But the anti-colonialism theme doesn’t read as a polemic; the story remains immediate and gripping right through Part 3, “Malaise,” which presents a completely unexpected surprise and a conclusion that may not satisfy one’s sense of right and wrong but will certainly engage the reader’s brain.

Another important idea in this richly layered tale is the survival of African wisdom and spirituality through decades of colonialism, perhaps even as one cure for the nation’s troubles. Much of that is embodied in the character of a blind grandmother, who shares much of her wisdom including:

“Remember this: a story that must be told never forgives silence.”

In Arrows of Rain, Okey Ndibe follows the wise woman’s advice. He tells a fascinating and important story—one that truly must be told.