Around My French Table: More than 300 Recipes from My Home to Yours 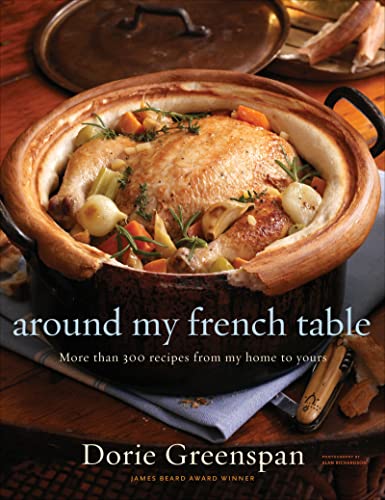 When Meryl Streep portrayed Julia Child in the film Julie and Julia last year, Americans rediscovered French cooking. A few weeks after the movie premiered in August 2009, and 48 years after it was first published, Child’s Mastering the Art of French Cooking landed in the No. 1 spot on the New York Times bestseller list and beouf bourguignon was back in vogue.

Now that we are taking another look at French home cooking, maybe its time to update our recipes as well. In Around My French Table, Dorie Greenspan, who lives in Paris part of the year, gives a fresh interpretation of French food and how it is being cooked today. It’s not Julia Child’s Paris anymore.

The book is positively chock full of delightful new interpretations on old classics as well as a few surprising new recipes. In her version of lentil soup, for example, (lentils being a fixture of home cooking in France), Greenspan starts with the basic recipe of onion, celery, carrots and lentils and then adds minced ginger, coriander seeds and orange peel, which really liven up this tried and true standby. Ginger and orange zest are also used in her braised short rib recipe, adding both zing and brightness to an otherwise traditionally heavy dish. In fact, Greenspan offers quite a few recipes use ginger and Asian spices, as if to say that even in France cooking has become more global.

One of the best chapters (they are all good, but this one is especially so) is the chapter “nibbles and hors d’oeuvres.” If you read through the chapter you will learn that in Paris (and France generally), you don’t need to offer much in the way of nibbles with your aperitif before dinner. In Paris, the most often served hors d’oeuvres are usually some nuts, olives, and something a little crunchy or cheesy like “cheez-it-ish crackers” or “mustard batons.” This is such a welcome relief for all those hosts who tend to go overboard with their appetizer spreads and end up ruining the appetite of their guests for the main course. Let’s all take a pledge to become more like the French, and stop the appetizer madness.

Dorie Greenspan is one of those Americans like Julia Child, Alice Waters, and others whose first trip to France and the food she ate changed the course of her life. By now we all know that for Julia Child it was her meal of sole meunière that initially hooked her. For Dorie Greenspan it was a strawberry tartlet that made her rethink her life and shift from gerontology to cooking and food writing. She has enjoyed a long and distinguished career working on projects with food luminaries such as Julia Child, Pierre Hermé, and Daniel Boulud, and has authored a few cookbooks of her own. Her work should be better known because she is one of those rare cookbook authors who has the ability to draw you into her cooking world and make you feel as though you are in her kitchen right along side her.

In addition to all the wonderful recipes, her anecdotal tidbits about life in Paris are priceless. If you have ever lived abroad or tried to buy food while on a trip to France, these stories will bring back memories that will put a smile on your face. There are rules to be followed and one way or another you will learn them. Like the time Greenspan bought some Brie at a cheese shop for a dinner party and it turned out to be not quite ripe. She went back the next day to purchase more and when asked how her dinner party went she complained ever so nicely to the sales woman that the Brie had not been as creamy as she had hoped. In doing so, she discovered that by complaining, she “scored a point for Americans, assured myself a steady supply of the finest cheeses, and learned something important about cultural differences: in America, if you complain, you’re a crank; in France you’re a connoisseur.”

Her introductions to many of her recipes are equally engaging, especially when she writes fondly about her friends, many of whom contributed recipes to this book:

“My friend Alice Vasseur has a most expressive face. Her smiles and frowns are oversized, and when she‘s excited, her eyes widen and her brows look like they’re going to take off. And so there we were, having tea in my Paris kitchen on a chilly winter afternoon, when all of a sudden her face lit up and she exclaimed, ‘I forgot to tell you what I made last night—it’s so easy and so good, and my friends loved it: chicken with speculoos!’”

Having so warmly introduced us to Alice and explaining that “speculoos” is a spice cookie particular to Belgium and northern France makes this dish almost irresistible. You can tell all your friends that the recipe comes straight from Paris and they will think that combining cookies and chicken is the height of sophistication.

All the recipes are relatively simple to prepare and are easy to follow. Greenspan also includes some additional serving suggestions or variations in her sidebars called “bonne idée” (good idea). The intention of the book is not to have us slavishly follow recipes, but to encourage us to try new recipes and then make them our own. It’s what Julia Child intended all those years ago when she wrote in the introduction to Mastering the Art of French Cooking, “Our primary purpose . . . is to teach you how to cook, so that you will understand the fundamental techniques and gradually be able to divorce yourself from a dependence on recipes.”

Child, who died in 2003, can never be replaced, but if she had been able to name a successor as a standard bearer for French home cooking in America she probably would have named Dorie Greenspan.