An Army of One: A John Rossett Novel 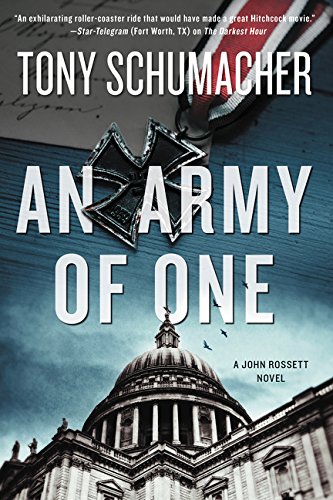 John Rossett has returned to his former job as a police detective after an interlude working with the Nazi occupiers of Britain, but his former association has left him a pariah to the British Resistance, and a suspected collaborator by his police colleagues.

Even though he is known to the general public as “The British Lion” for previous exploits, Rossett knows that his recent past has left an indelible stain on his soul. In a very subtle, very understated way, Rossett is attempting to redeem himself.

“I’m the law. I live by the law, and the law does what it has to do. I have no half measures; I don’t scare people. I’m a policeman. I do what I have to do, and I do my job properly. That is who I am.”

With that statement he attempts to distance himself from the work he did for the Nazis. He had rounded up the Jews, loaded them in cattle trucks to be taken away. “It didn’t take much for the memory to come back, the work that shamed him, the killing of the innocents.”

Kripo Generalmajor Erhard Neumann wants Rossett to work with the Germans again. He promises Rossett that he can protect him against the machinations of the brass at the Met, who find him an embarrassment and uncontrollable. The officers of the Met hated him, and Rossett knows it.

Neumann promises Rossett protection, and offers to free him from a dusty basement in the basement doing endless paperwork. But Rossett wants nothing to do with the Germans again. “I want to see black and white, good and bad, be a copper again.”

But as Neumann points out, the world has changed, and there is no going back. After night of drinking too much, Rossett agrees that being out on the street again even if it is investigating crime from a German perspective is better than his present circumstances.

Partnering up with Neumann, Rossett’s first assignment is a dead American consul in Liverpool. A German, SS Captain Karl Bauer, is arrested for the murder, an almost unheard occurrence. The Liverpool coppers want nothing to do with man, but the Nazis can’t really afford to offend the Americans.

Karl Bauer solves part of the problem by going on the run after he is questioned by Rossett and Neumann. Their assignment is to find Bauer and bring him in—one way or the other. Complicating matters is Bauer’s superior, Major Theo Dannecker, who is colluding with the dead American consul and the British Resistance, as well as a few members of various criminal enterprises, to find and steal a shipment of gold before it is loaded on a ship bound for America.

The very last thing Hitler and the Germans want is that gold turned into arms and aid for the Resistance. The Nazis are barely able to control Britain as it is. Neumann tells Rossett that only London and to a lesser extent the south of England is securely. Food riots, a starving populace, and either lack of law enforcement altogether, or barely functioning police departments are widespread throughout the country. Against this backdrop of political chaos Rossett and Neumann must find Bauer.

Mr. Schumacher describes Liverpool through the words of Chief Superintendent James Evans, the tired and ineffectual head of what remained of Liverpool’s police. “This city has fallen apart; it barely functions as a place to live for civilized people. We get no money, the schools have closed, the libraries have closed, the museums have been looted, and the local politicians roll over and do the government’s bidding with barely a whimper.”

The city is a hulk of what it once was with bomb and artillery damage that leave plenty of places for Bauer to hide. Pockets of criminal gangs and the Resistance gather in burned-out buildings. If blood doesn’t literally run in the streets, the reader feels as though it does.

Betrayal, ambushes, and kidnapping fuel the nonstop action as Rossett must outwit the SS in a race to stop the conspiracy to steal the gold. Schumacher has written an alternate history in realistic terms that one can almost accept as a possible scenario if Hilter had not called off a planned invasion of Britain.

By having Rossett work for the Nazis in the second installment of this series, Schumacher set a very difficult goal: redeeming Rossett from his tainted past in this third installment. Some fans of thrillers and alternate histories may find Rossett’s redemption less than convincing. To make a fair assessment one should read the previous books in the series.