The Armored Saint (The Sacred Throne) 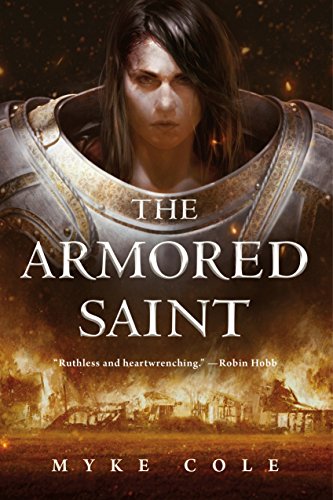 The Armored Saint is a book that doesn’t quite know what it wants to be. It tries to straddle the line between epic fantasy and what seems like a coming-of-age story for its protagonist, Heloise, who vacillates between a little girl and “a woman grown” throughout the whole book. Those descriptions aren’t an exaggeration, either—Heloise alternates between occasional moments of insight and adult, even courageous behavior, and acting like not a just a child, but a young one, with all the contingent errors in judgement and leaps into action with no thought of the consequences.

That isn’t to say that the book isn’t enjoyable. While the worldbuilding has a very familiar feel to it—anyone even vaguely familiar with the famous biblical quote about witches will recognize the origin of the book’s religious maxim: “Suffer no wizard to live.” The reasons for that maxim seem trite at first, then develop into something truly scary by the end of the book.

There are several deus ex machina moments, such as a village tinker being able to build the sort of war machines you’d expect in a steampunk setting, or even a science fiction universe. Hints are dropped about wars long past, about an emperor who saved humanity from devils, about the evils of wizardry and the persecution of those—like Heloise—who dare to love outside the norm. The makings for a really good, really intense adult fantasy story are there, and backed up with some very graphic, intense scenes of violence.

There’s a whiplash effect, though, when the reader witnesses all of these events through Heloise’s eyes. She has a youthful perspective not really suitable to a lot of the grim happenings around her. She sees the potential good in wizardry, the injustice of the Order—she literally gets a magical animal companion at one point. If this doesn’t scream YA, then nothing does, and with some modifications this could have been a very suitable and convincing young adult story. But then Heloise makes childish mistakes that end up having very adult, and deadly, consequences. The cognitive dissonance while reading is real, folks.

The greatest issue with this book is making the reader believe that Heloise—sweet, easily indignant, innocent, in-love-with-her-best-friend Heloise—is capable of suffering immense pain, enduring searing emotional and physical loss, then rising above it all in a battle royale and becoming the titular character—an armored saint. It is an unfortunate strain of credulity that will need to be supported and enhanced in the sequels, so that the reader doesn’t look up from the book and think to themselves, “No way.”

That said, if Myke Cole can deliver on the promise he’s made in book one of The Sacred Throne series, that of a girl maturing into a woman who truly is the savior she’s fallen into being, then it will be a tour de force. If you don’t mind a cliffhanger ending and want to read about a world where magic is fascinating and dangerous, and technology gives people the potential for greatness, then give The Armored Saint a try.

Cari Z. is an award-winning author who writes LGBTQ science fiction and fantasy stories, novellas, and novels. Her most recent book is Off the Beaten Path (Dreamspinner Press, 2017).