Armies of Sand: The Past, Present, and Future of Arab Military Effectiveness 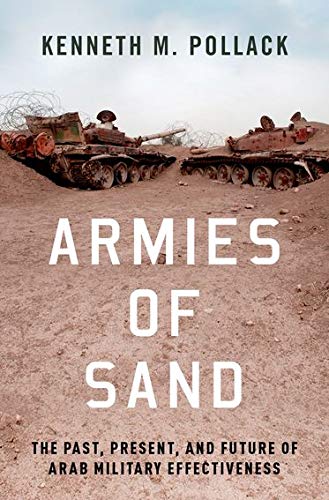 “a valuable resource for understanding the lack of military effectiveness of Arab armies, along with a dour outlook on any expectation of improvement in the current political and cultural environment prevalent in the region.”

Kenneth Pollack has a well-deserved reputation for expertise on Middle Eastern conflicts and political/military affairs. In this new volume, a capstone history and analysis of Arab military effectiveness since 1945, he combines his 30 years of study with thoughtful and compelling analysis to produce what should be the standard reference for understanding both the failures and successes of Arab conventional and non-state military forces in the numerous wars and insurgencies in this turbulent region.

The introduction begins with a quick recap of the 1967 Six Day War, the seminal political event of the last 50 years, where an outnumbered and outgunned Israeli military delivered a stunning defeat to the combined armies of most of the Arab world.

Utilizing a well-planned series of airstrikes, the Israelis quickly destroyed most of the Egyptian Air Force on the first day of the war before relentlessly launching their army to outmaneuver and drive the Egyptian army out of the Sinai Peninsula. Similar campaigns mauled the militaries of Jordan and Syria, leading to a lopsided victory that transformed the entire Middle East and marked Israel’s rise as a dominant power in the region.

Using this background narrative and the effects of this war as a departure point, the author examines four of the most cited reasons for the generally dismal performance of conventional Arab militaries: Soviet doctrine, the politicization of their militaries, the lack of economic development across much of the Arab world, and the role of culture and society in developing military capabilities. The research is thorough, the conclusions well-reasoned and defended, and Pollack’s writing combines an analyst’s terseness with a historian’s talent for making a fairly esoteric subject interesting and readable.

Pollack assesses each potential cause in depth, offering an extensive background and overview of the issue before detailing its effects on Arab military capability and capacity. He then offers a comparison of how alternative countries fared in wartime with similar issues.

His choice of comparisons is wide-ranging, showing the breadth of his research, while offering fascinating insights into some little-known conflicts such as the almost decade long conflict between Libya and Chad in the 1970s and 1980s and the proxy war between South Africa and Cuba in Angola during the 1980s.

Interestingly for many proponents of the opinion that Soviet weapons and doctrine were the chief impediment to Arab military victories, Pollack quickly dismembers that theory, using the Cubans in Angola as an example, showing how their use of Soviet tactics and weapons, particularly armor and artillery showed a significantly better performance against a tough South African foe.

The role of economic development is examined next, and although Pollack believes it does have a major impact, he contrasts how a much more economically challenged Chinese military achieved stunning victories in the Korean War during 1950–1951 before settling into a stalemate against overwhelmingly superior Western firepower.

He finally focuses on the role of politics and culture as the chief driving factors in undermining the performance of Arab militaries in war. Politics is a major factor as many Middle Eastern militaries are deeply woven into their country’s political fabric, either as the regime itself, the protectors of the regime, or the power brokers for the regime. The palace intrigues a military can find itself drawn into often degrade its primary role of achieving and maintaining combat readiness.

In his final analysis, Pollack makes a compelling case that it is Arab culture, common across different armies and conflicts—stressing a strict hierarchy with top-down decision making, subordination to the group, and a desire to avoid shame or bad news that ultimately undermines any long-term gains in combat effectiveness.

All of these factors, along with a disdain for manual or technical hands-on work, and a society wide penchant for rote memorization as the basis for all education, has inhibited any real ability of Arab armies to innovate and win on the modern battlefield. His examples, especially the 1967 and 1973 Arab-Israeli wars, show how cultural and societal issues allowed a smaller but more creative and adaptable Israeli military defeat numerically superior armies.

However, in any analysis there are always exceptions to the rules or factors that need to be examined, and Pollack offers a perceptive evaluation of two Arab military organizations that have experienced a measure of battlefield success—Lebanese Hezbollah and ISIS.

Both of these armies began as cellular insurgency/terrorist groups, emphasizing small unit initiative and decentralized command. This counter-cultural upbringing made them more adaptable and flexible than conventional Arab militaries, allowing them to better integrate high-tech weaponry with small unit tactical proficiency to outperform larger and better equipped opponents, at least for a short period. Each force was also very religiously motivated, assisting in their unit cohesion and willingness to stand and fight.

The analysis of these organizations provides an interesting point-of-departure for looking at the future of Arab militaries as well, especially key U.S. allies in the region like Iraq and Egypt.

For example, both the Soviets and Americans had remarkably similar observations on the Arab militaries they trained and equipped, showing that even after 40 years of training, technical support, and sophisticated weapons, Arab military prowess has not markedly improved. This could have a significant impact on the stability of this volatile region as the U.S. seeks to disentangle itself from the low-level conflicts that continue across this region. This book provides a valuable resource for understanding the lack of military effectiveness of Arab armies, along with a dour outlook on any expectation of improvement in the current political and cultural environment prevalent in the region.