The Arm: Inside the Billion-Dollar Mystery of the Most Valuable Commodity in Sports 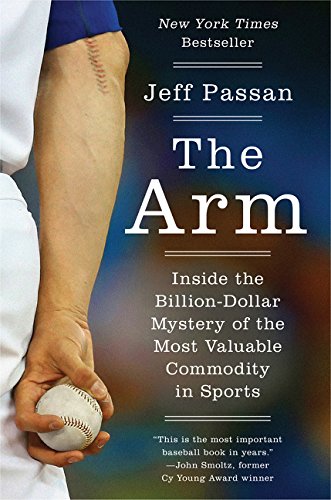 Jeff Passan, a baseball columnist at Yahoo! Sports, set out to write a baseball book that he hoped “could help a lot of people.” He categorically succeeded.

His work on the ubiquitous injuries suffered by baseball pitchers to the ulnar collateral ligaments of their pitching arms and the surgery named after the first pitcher to undergo the miracle procedure, Tommy John, is an unqualified treasure. He has written the definitive work on the “greatest triumph in sports medicine history,“ a must read for people within the baseball industry and for the millions of fans who follow the National Game. “Everything” in baseball “revolves around the arm.”

We have become accustomed to hearing about pitchers who are placed on the 60-day disabled list and scheduled for “the surgery.” We know it will take them a year or two to make it back to the Major Leagues, if they make it at all. We next touch base with pitchers when they make their heralded returns to the mound. Passan fills in the details of the hiatus—the remarkable surgery and the tedious rehabilitation period when only the most driven athletes can put in the physical and psychological effort needed to recapture the glory.

Passon offers a detailed narrative of the surgery and its aftermath. This is not a routine medical procedure. Passan is not a surgeon, but as a talented sports writer he learned the medicine in order to translate it for the informed reader.

In a fascinating chapter, he explains the art and skill of the surgeons who have practiced UCL reconstruction. Doctors Frank Jobe, James Andrews, and Neal ElAttrache are the medical stars. Two Major League pitchers—Daniel Hudson and Todd Coffey, both of whom experienced “revisions,” a second Tommy John surgery—shared with Passon their lives between the surgery and their ultimate return to the big leagues. Their stories are compelling.

After rehabilitation, pitchers must demonstrate for the scouts that they can pitch once again at Major League performance levels. If they have not, there will be no offers to return to the mound. For second-timers, the prospects are even slimmer. The pride and passion that motivates players through rehab may ultimately be replaced by the reality of their failed bodies. Major League pitchers are all “hooked on success,” but ultimately, as Passan explains, the game may “quit” them.

Passan has little positive to say about those businesses—part of what he calls the “youth baseball-industrial complex”—that rush teenagers into intensive preparation for professional careers. Applying early stress to the arms of youngsters is too much, too soon. Well-meaning parents can mislead their children, perhaps wooed by the prospects of riches for the highest paid players in the game. Few will make it, and “young arms fail everywhere.”

Passan does have words of praise for some super-agents, such as Scott Boras, who serve their clients’ long-term interests. No one in the baseball industry, however, seems to have collected the data that might prevent the injuries in the first place or reduce the risk of a UCL failure. How many pitches in a game or innings in a season are too much? What causes these injuries that threaten many players’ careers? Why is everything about this common injury and treatment so hypothetical? Baseball clubs like the Chicago Cubs that are willing to guarantee a free agent starting pitcher, Jon Lester, $155 million dollars, certainly would benefit from better data regarding his durability.

Passan has a good feel for the personalities of the baseball business, including front office officials as well as on-field talent. These men know their financial needs and their personal limitations. They also know what they don’t know: the future prospects of a pitcher’s arm.

Obviously, many in the baseball business would profit from better solutions. Passan explores a variety of the latest medical, scientific and flimflam approaches. Few of these alternatives show much promise. Only comprehensive data and scientific study will indicate if there is a better way to address the foreseeable problems of the bones, muscles, tendons and ligaments of the arm. Whatever developments occur—whether improved surgery, biotechnical advances, or preventive measures—Passan’s book will have offered the direction that the game should take.