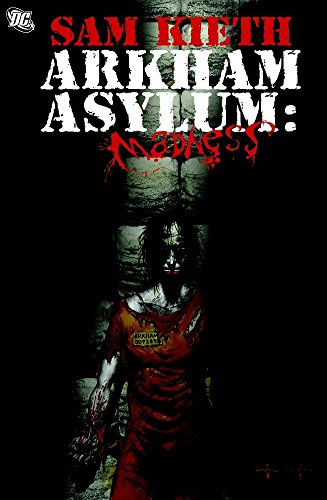 My first shock with comics occurred in the seventies. I was under the ominous grasp of a winter flu when my mother decided to take me to the doctor. After several rounds of negotiation there came the irresistible offer: “On the way out the doctor’s office I’ll buy you a Capitan America, OK?” She kept her promise—and changed my childhood.

At home, medicated and warm under the covers, everything was fine. I finally relaxed and started reading. Not even the Captain’s shield was enough to protect me from the social upheaval that was shaking the world. The Vietnam War, the arms race, the cold war and racial conflicts, already in debate around the world were, at that moment, landing in my bed. The comic’s pages, full of colors, especially red, showed a student being shot and killed during a protest at the University of California, Berkeley.

Politics, pacifism, militarism, psychological conflicts—all were in Arkham Asylum. But there was nothing super. No heroes. No villains. No victories. Reality was taking over the comic’s pages. That generation of readers around the world was getting older. Their age was increasing and the book’s circulation was dropping. The editor’s choice was to pick up the heroes from the comics and drop them into our reality. The Batmobile could get a ticket and be towed, Superman had conjugal problems, and Capitan America, my personal childhood hero, had to hire an accountant and pay taxes.

Twenty years later, at the end of a day when my performance as a lawyer of a big corporation was far from super, from a newsstand the cover of a comic book screamed for my attention. It was very expensive, I recall, but the book delivered me my soul. Another revolution was happening through DC Comics, by Grant Morrison’s script and by the incomparable art of Dave McKean. Batman and The Joker came to rescue me.

In Arkham Asylum Batman is insane. Everybody knows it, too. Or he wouldn’t be trying to defeat crime, running on rooftops during the night dressed as a giant bat. As a kid, Bruce Wayne, in his “morning personality,” watched his parents being murdered. Later, using the apparently endless resources of his inheritance, he built a shelter under his mansion and used special equipment and a flashy car to pursue the enemies of peace and justice.

The true problem is that Bruce (Batman), is not alone in Gotham City. And this is made perfectly clear through a “sentence” that is bestowed upon us in an epigraph from Alice in Wonderland: “Everybody here is insane. I’m insane. You’re insane.”

Along several years all the meanest, most sadistic, and brilliant villains that battled Batman ended up incarcerated in Arkham. Researching the “batmaniac universe” we find out that the Asylum was founded in 1921 by Amadeus Arkham so people with mental problems could live, be treated, and recuperate in a safe environment. With this plan, Amadeus Arkham, a famous doctor at the time, turned his own gigantic mansion into a huge psychiatric ward. It was all fun and games until his very first patient, repaying Amadeus’ generosity, killed the doctor’s wife and daughter, an occurrence that, understandably, made him insane and resulted in his commitment at his own asylum.

Later, under new administration, as the place became famous as a deranged depot, came the final touch: Jeremiah Arkham, Amadeus’ nephew, maintained the place as an asylum, but completely refurbished the building into a labyrinth. The new concept: work hard to find a way out. Nice touch.

The plot in 10 words: prisoners rebel; make hostages; Batman tries to control the situation. So far, nothing’s new. But as a matter of fact the main character is the Asylum. Next comes The Joker, a permanent resident, and in a distant third place comes the Big Bat. Just in terms of its innovation is the book worthy of reading. And when the fans realized that The Joker, page after page, taunts and humiliates Batman, the editors found themselves in the middle of another rebellion: a large number of readers could not accept the constant mocking—a veritable barrage of insults and abuse—directed at Batman.

To make matters worse, when fans spread the word that The Joker was, unchallenged, raising a very hush-hush subject by attacking the sanctity of the relation between Batman and Robin, the debate elevated the comic to the status of a polemic. At some point Batman realizes that his black gloves are covered with a white powder. The Joker, with a viciously green face, sarcastically, says: “It’s salt. Why don’t you sprinkle some on me, darling? I’m delicious enough to be eaten.”

The book is probably more appealing to the kind of fan who would enjoy a David Lynch movie such as “Blue Velvet.” The emotions are transported from a “movie reality” to a “comic book reality,” but all the “Lynchianisms” are there. Instead of a child crying, a woman loving the man that beats her, a stabbed kitten or a loved dog that now is nothing more than road kill, the readers find loneliness, rainy nights, murderers, grimy walls, empty streets, stabbings, and insanity—all brewing in the same pot.

Batman’s eyes are our eyes inside Arkham, inside all that madness represented by those dark and fetid corridors. They provide a safe conduit with which to roam through the story alongside Batman, a sad, disturbed, and incomplete silhouette. This is, by far, the most violent of all Batman comics, with dozens of mythological, psychological, mystical, religious, and symbolic references. Some are quite clear. Others, depending on the reader, are still to be found in the dark corners of Arkham’s rooms.

In comics, a super-hero victory is seldom definitive. Arch-villains always return, even if only with a different name, with a cape, or a heavier accent. Being a hero is no picnic. There’s a limit and Batman is way beyond it. That is why when he is called to deal with the crises inside the asylum he has hallucinations, stabs himself, cries out for mamma Wayne, and gets lost. When he finally gets out he doesn’t feel invigorated by the victory, but overwhelmed and wrecked by the madness that took over inside Arkham.

But where is that thin line between sanity and insanity that Batman crossed? Is it inside Arkham’s walls or here, outside, closer to our homes, closer to our real lives? The frontiers between right and wrong, black and white are blurred. We live in a gray region. Subtle differences and nuances in our behavior are not noticed until we are, hopelessly, in the dark.

It doesn’t matter where we go; we take with us our life and our shades of light and darkness. Arkham Asylum is proof that madness is contagious. Eventually it will catch up to you.

Fabio Marchioro is the award-winning author of Pensagens, a collection of 18 short stories, and the novels Geena (2003) and Revessa (about to be released). He is a seasoned graphic novel reviewer.