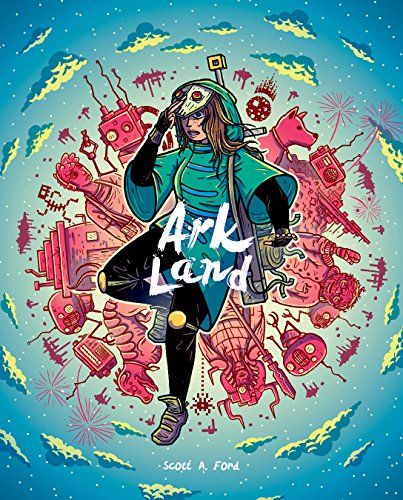 Eighty-four years before, the giant ships appeared, orbiting the little planet. Once the orbits decayed, the ships began falling. On board were animals and plants, and most survived to make the world their new home. A few of the animals are made into pets. Some roam wild.

A religion has sprung up about the mysterious builders of the so-called arks, and many shrines have been built, though most are now abandoned. Each year, there’s a festival to celebrate the arrival of the first ark.

“On Ark Day, let us not forget to cast our attention beyond our community and into the depths of space from which the arks came. For it is out there that the mysterious beings who sent the arks must dwell and it is through them that the answers to the cosmos lie.”

This year, the eastern Ark Lands celebrate their 61st Ark Day, and Ark Lands Radio is sponsoring a contest. The biggest ark of all will be crashing and the station will pay 4,000 coins for its debris.

Kairn lives in one of the abandoned shrines with her two dogs, Rex, and Bertrand, an ark descendent, as well as Patterson, a small robot cobbled from ark parts. When Kairn isn’t playing ancient video games, visiting her friend, Bench, part-time bartender at the Skulduggery, a bar/video arcade, or having Zanfri the mechanic repair Patterson, she’s scavenging ark parts to sell. When she hears about the contest, Kairn thinks this would be a great way to get money for Patterson’s repairs and pay for more games.

Bench gives her a map to the area where the ark will fall, and explicit instructions. She also warns Kairn to watch for the Hunters who live in the forest and don’t like ark scavengers.

“Just follow the map and you should be fine. Watch for signs saying, ‘Forest Outfall.’ Good luck, and please, don’t die.”

Getting an early start, Kairn soon finds herself on an adventure that will take her and her companions through the forest and into the moors where the ark is scheduled to crash. She’ll survive the Hunters’ attack and beat everyone else to the crash site. There, she’ll come face-to-face with those who oppose ark-worship as well as the mysterious worshippers of the arks who believe the arrival of the largest ark of all will provide a revelation about its builders. What happens then is something neither Kairn, the Hunters, or the worshippers expect.

Written by Scott A. Ford and drawn in the author’s unique style, Ark Land is an entertaining graphic novel with an interesting story line. Many consider the so-called “comic book novel” is geared mainly for the younger generation because it consists of pictures with little dialogue. Those skeptics are invited to read Ark Land and prepare to be surprised. The broad strokes and scope of the drawings as well as the nuances in each panel prove very quickly that this graphic novel’s reach extends more to the adult reader than ones of a much younger age. Relying more on visuals than writing, Ark Land’s cast of characters are well-delineated and well as fascinating, and Kairn’s confrontation with the ark-worshippers hints at far-reaching consequences.